Talk to our experts about AI Test Automation 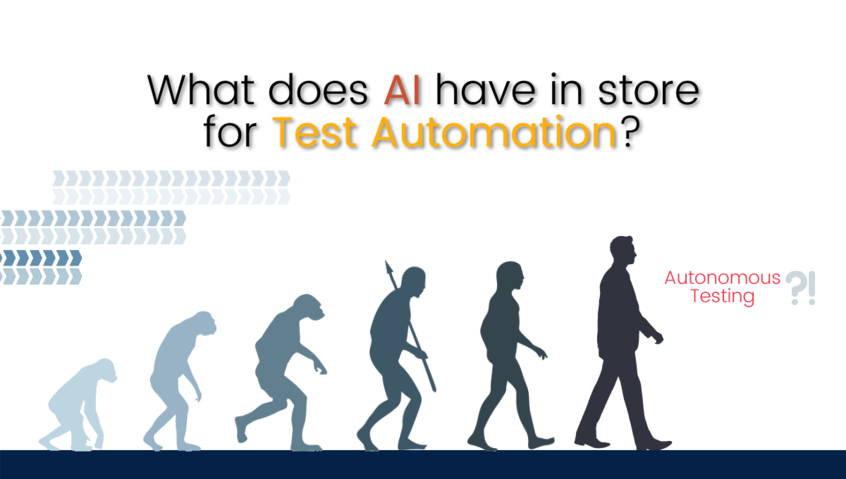 A good Test Automation Strategy is crucial for enabling collaboration and Continuous Feedback to the team who are striving to build flawless software. As AI is gaining popularity for solving complex business challenges, offering major measurable gains in business value; organizations are constantly in search for more ways to make the most of the simulation technology. Gartner predicted, by 2025, 50% of global enterprises (which was only 10% in 2020) will have orchestration platforms to operationalize AI across the business functions. All the while, the need for a brand-new mutation for test automation practices that are scalable is growing to ensure high-quality software delivery at the pace the business demands. Don’t you sense a match in making?

Let us first take a step back and do a quick recap. An ideal Test Automation strategy should be able to offer:

From what we’ve observed while helping global corporates to reach their quality goals, AI can be the accelerator for the Test Automation mutation we mentioned above. Let’s look at some areas of Software Testing Lifecycle that can benefit from introducing Artificial Intelligence.

UI is the primary element that determines your customer/user’s journey in the application/website. It is all about the look and feel so testing UI involves examination of the designed elements being displayed in right color, shape, position, and size. Fortunately, with the emergence of automated visual validation tools, Image-based Testing became simpler than ever. It hardly needs any human intervention; the practitioners believe automating the GUI test case designing will soon become a mainstream practice.

When you run multiple tests on the script within the same environment, the common expectation is to get same results AKA Test Stability. If some tests have failed, an immediate investigation to find out what went wrong should be commenced.

Test Automation brings speed to TDD. But the downside is maintenance of such gigantic test suites/scripts. When your Toolset is empowered with AI, you won’t end up panicking for ‘object not found’ which could’ve been caused by change of locator. Test results tend to be flaky when the indicators are dynamic or when the locators change based on the context of the application/product. Artificial Intelligence can prevent such incident with locator-identification strategies and self-healing mechanisms.

By connecting AI-powered Testing application with Production applications, the ML mechanisms use the real-time data to create autonomous test cases. AI determines the commonly used actions/functionalities by users in the application and clusters them into snippets which can then be infused into test case creation. These snippets may include simple logic, conditional logic, and may also have aspects of repetition in them.

If your testers come with decent programming skills, the refactoring and further evolution can be done to improve Continuous Learning.

P.s. If the scripts are implemented using non-programming or no-code tool, the task is most likely to get tricky. Ensure the tool you chose allows specific customizations.

When velocity and volume both are expected out of test cycles, Parallelization comes to rescue. Unlike sequential testing, this method results in higher test efficiency and quicker turnaround time in software deliveries. But testing multiple test scripts or running a test script over multiple test environments simultaneously is no simple feat. Platforms like Selenium offer both on-premise and cloud-based parallelization while efficiently managing the queues.

AI can be exploited to the fullest for Parallelization from analyzing the traffic of various devices and browsers to analyzing the performance of the system. It can add velocity to your Functional test Automation. Plus, it is a relief for agile teams to be able to auto-scale CI/CD runners, so they can go for optimal consumption of resources.

It is impossible to do Impact Analysis without tracking (or maintaining good) Test Coverage. Automating AI-powered code analysis offers an immediate review of any code changes upon each pull request, spots quality issues, and optimizes the entire pipeline. Having a mechanism to automatically validate and compare releases based on pre-defined datasets and acceptance criteria while analyzing security issues boosts CI/CD practices. It not only helps Testing team but also helps Developers to improve their code maturity and deliver better code faster.

No one wants bugs in their code. The longer it takes to discover, the new build does more damage than good to the application. Some bugs are simply too hard to find with manual efforts, but those that were ignored initially become expensive in later stages. Artificial Intelligence can speed up the test cycle and help teams to prioritize regression test cases by accurately locating the usage and failure trends to spot the most critical and less obvious faults.

Make the most of Test Data

Organizations that put Continuous Testing into action within their CI-CD and DevOps practices acquire great amounts of testing data daily. All this data can’t just be archive records but can be used for decision making if you can create patterns out of it. AI and ML systems today are matured enough to visualize data from various sources and create reportable and even actionable insights out of it. If all the test results from your unit, API, functional, accessibility, integration and other tests can be put through the right engines, performing Test impact analysis, finding platform-specific defects, detecting security loopholes, Test environment instabilities and a lot more is possible.

In the age of Agile development and CI-CD, the applications are constantly growing as the developers are constantly adding new builds and features to it. Even the most experienced testers, struggle to keep track of all the changes and maintaining the test scripts with respective to the new builds. Changes as simple as a new pop-up or a new element ID can interfere with the test execution flow. But Artificial Intelligence can offer self-healing capabilities which can automatically detect the changes, act as element locators and fixes most of the minute intrusions on the go. When the flaws require additional attention, the engines notify the developers and can suggest quick fixes to avoid or minimize the risk.

Most of these challenges aren’t really ‘defects’ but create noise and slows down the pipeline by interrupting with test automation. By detecting them proactively and fixing them on the go through AI, the testing teams can practice more Exploratory Testing.

How far are we from Autonomous Testing?

Let’s start from the rudiments. We obviously start with Manual Testing. Then we dip our toes in Test Automation using tools such as test editors and simple capture-and-replay AKA Assisted Testing. Next, we adopt platforms (code-based or code-less) that generate TA scripts, yet a human is required to enhance and customize them. Let’s call that Partially Automated Testing. Now comes Integrated Automated Testing, where we only define the high-level intent of a test case for a particular business process and let TestBots take care of it from there. This is where we introduce full-range Artificial Intelligence to let TestBots perform exploratory testing – where they generate and execute (most) test scenarios independently. We call that Intelligent Automated Testing.

When the systems matured enough to be able to evaluate the application-under-test on their own, decide what to test, when and how; perform the test, summarize the results, and take a call on ‘Release’ or ‘No Release’ – that’s when we reach Autonomous Testing! 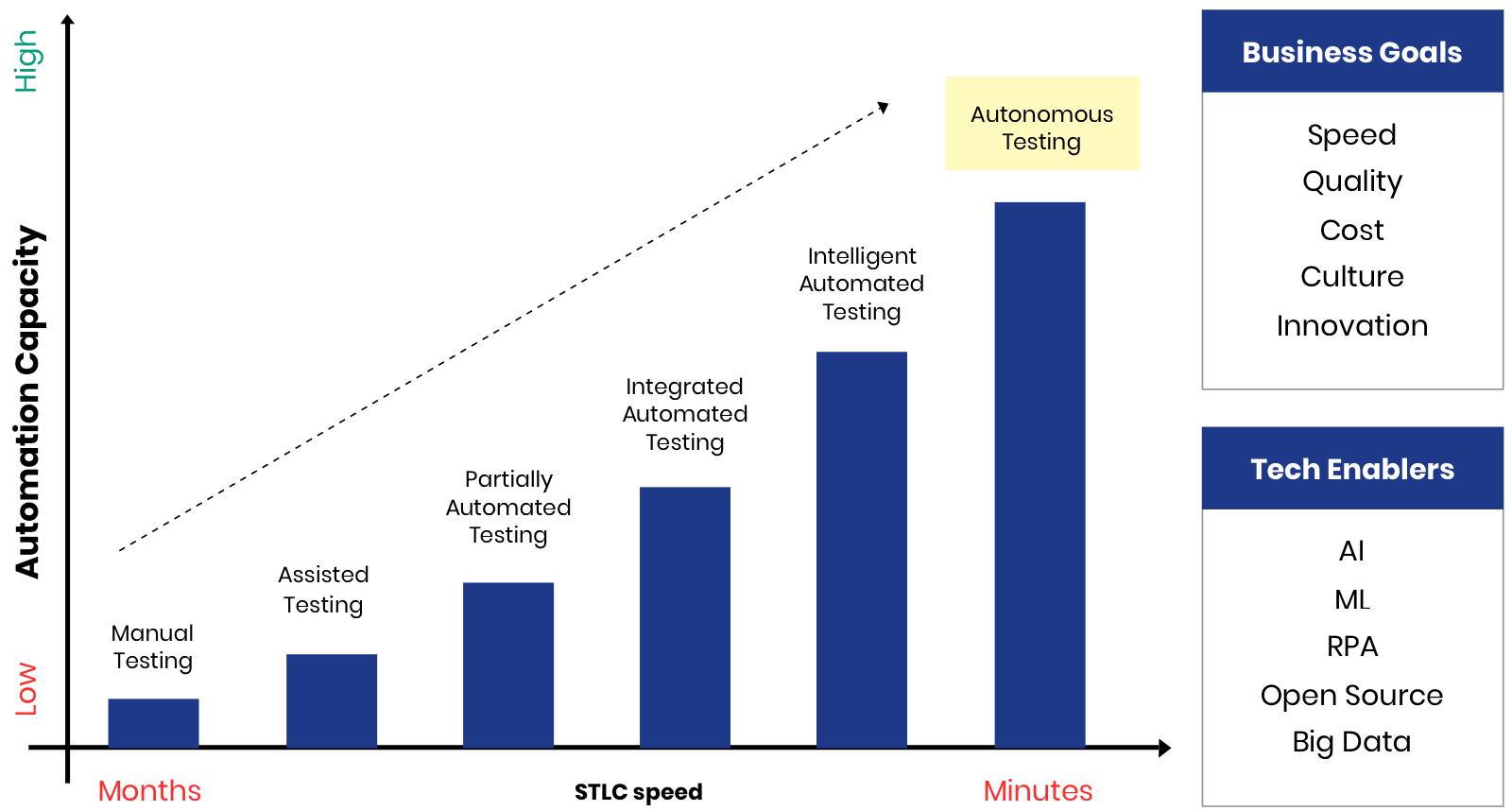 As Google’s CEO Sundar Pichai said in a recent interview with World Economic Forum, we are decades away from unveiling the real potential of Artificial Intelligence.

Bottom line is, Intelligent Test Automation is beyond one popular automation framework. The secret lies in maturity of adopted systems and nurturing them with business use cases and data learnings. AI and ML combined with Big Data can do wonders to any business. Last but certainly not least, never overlook the importance of your squad, build cross-functional people and teams. In addition to bringing multiple skills and expertise together, constantly find opportunities to up-skill and cross-skill them. This practice not just places everyone in other’s shoes and aids whole-team approach but also slowly subsides the ‘test phase’ and makes it an integral part of software production right from design phase.

Qentelli is known for its smart and orchestrated Quality Engineering services and Digital Innovation initiatives for various corporate giants across the globe. Along with a center of excellence team and a dedicated Innovation team who are relentlessly working to find solutions for today’s digital business challenges, we are actively partnering with progressive platforms that are doing some exceptional work in the field of Artificial Intelligence and Machine Learning. If you are wondering how you can make the most of the evolving technologies to transform your business, drop us an email!