Talk to our experts about Codeless Test Automation 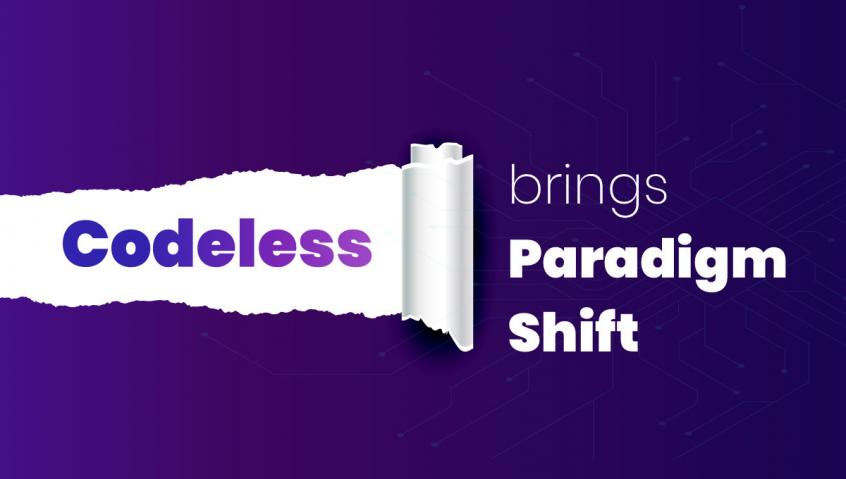 The software world is moving at extremely high speed with Agile and DevOps practices. Speed and Quality are the two newest and promising players. Given the customers’ rising expectations and cut-throat competition, Speed and Quality are very important. This intensely pressures Quality Engineering (QE) teams to balance speed and quality with fast-paced releases. Limited QA budgets, complex applications, and emerging technologies like Mobile, Analytics, IoT, and Cloud are making things even tougher for QE teams.

IT leaders are continuously looking to roll out applications at a pace that has never been done before and at the same time not compromising on Quality. They have tried and are on the continuous lookout for new tools, technologies, frameworks, and approaches that can help in accelerating testing from Day Zero.

The Present State of Testing

QE and IT leaders are increasing budgets to orchestrate quality assurance and testing in the new ways of releasing applications. Building new skills, tools, and technologies are adding up to the already high testing budgets. QA and testing account for one-fourth of the total IT spending. As per Capgemini, World Quality Report 2017-18, the testing budget allocation will rise to 32% by 2020.

Conventional testing is no longer the medium of choice because of the slowdown it brings to the development phase. New technologies like Test Automation, AI technologies are seeing an uptick in the demand to deliver high-quality software at a faster speed.

Test Automation and AI technologies have a lot of promise and are delivering their promises to an extent. But the flip side is the limited skilled workforce, lengthy learning curve, test data maintenance and management, resistance from the old guard, and a plethora of diverse tools claiming to do ‘everything under the sun’. So, it is even more imperative to address the questions–How do teams extend the same level of speed and quality in testing as development? Are there any challenges that can be addressed for quick wins to deliver high-quality applications? What is the way ahead for testing in software development? The answer to all these questions is Codeless Test Automation. This article will help IT and QE leaders to understand what Codeless Test Automation means, how it works, its benefits, and the future of testing as a practice–Truly, we are seeing a paradigm shift.

What is Codeless Test Automation?

Codeless test automation means Automating your test cases without writing a single line of code. Codeless test automation is built to minimize the efforts and time that goes into the testing phase. It also complements the changing nature of application testing. As applications are getting more complex, it is unrealistic for businesses to focus entirely on acquiring new skills for testing and understand new technologies. Codeless Test Automation offers a middle ground, i.e., to stabilize and speed up testing efforts. Businesses can no longer afford the luxury of delayed testing or releasing flawed products; they need to consider Codeless Test Automation in the early stages of SDLC to make testing an integral part of the whole delivery cycle.

Test Automation Provides Limited Coverage: The increasing popularity of fast development practices put pressure on time and workforce constrained testing functions. While development usually involves adding one feature to the product, testing requires end-to-end testing of the whole product to ensure existing features are performing as intended with the addition of new features. The current test automation practices offer the ability to achieve greater levels of coverage, but that comes at a cost (time taken and skills needed). And when the teams are running against the clock, this limits testing coverage before every release leading to bug slippages.

‘Shift Left’ remains a theory: The current test automation solutions require testers to write test scripts, execute them, maintain them, and adhere to best practices of coding and testing. This increases time in the peripheral activities and diverts the efforts from product testing which affects the basic premise of ‘Shift Left’ and kills the whole promise of accelerating testing. ‘Shift Left’ has become a theory rather than the practice for Continuous testing. On the contrary, codeless testing does not involve any of the above activities saving a lot of time for testers.

Testing is a Business Function: Testing is a business function as it impacts the bottom-line directly. The cost of bug slippages multiplies and penalizes businesses in terms of brand value, security mishaps, customer dissatisfaction, and delayed time-to-market. Testing, as a function, needs ownership from business teams like customer service, analysts, product management teams to address flaws early in the lifecycle. This requires a common and easy-to-use approach for testing processes, an intuitive platform to offer drag-drop testing functionality for business users. Codeless Test Automation is breaking new ground in providing these capabilities by taking a strategic and business approach to speed up testing in the early phases of the application lifecycle.

Industry sees testers as coders than the business personnel, but businesses are experiencing the shift now. The imperative for testers is not coding but understanding end-users’ requirements, build test cases accordingly, and execute them to report issues at an early stage.

How does Codeless Test Automation works?

Codeless testing work on one simple principle: Not required to write a single line of code. Testers are not required to know the technology or framework or any other coding best practices to test products using Codeless tools. However, end-to-end technical and business knowledge of product under testing is good for testers.

The Future of Codeless Test Automation

Testing has always been a ‘not-so-glamorous’ job in the software world. The real charm has always been in development. This made testing take a backseat. Development is seen as a creative function of adding new functionalities, pushing releases, and writing new pieces of code, whereas testing is considered an afterthought, a mundane and repetitive task.

Qentelli’s engineering solutions provide the best quality, intelligent, and automated testing services so our clients stay ahead of the curve. As part of our engagements, our engineering team uses the latest technologies to develop an end-to-end testing model. Our flexible engagement models allow us to hire poly-skilled people to work on the latest technologies including Codeless Test Automation tools like AccelQ, Cloud QA, Testim, TOSCA MBTA, and others. Want to know how Codeless can be integrated into your current testing function, email us at info@qentelli.com.