Talk to our experts about Continuous Deployment

An Introduction to Continuous Deployment 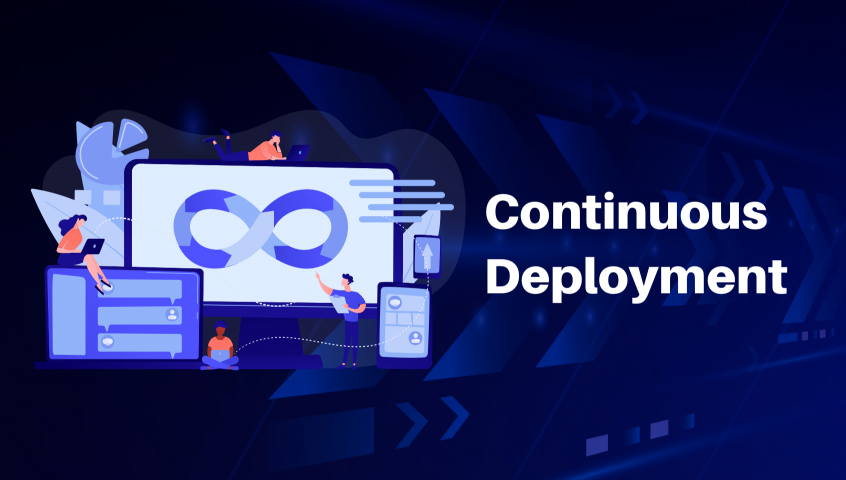 Continuous Deployment (CD) is an automated software process, that enables agile software development through shorter cycles, faster releases, and reliable software at the end of every cycle. When a team is practicing Continuous Deployment, it usually means whenever the codebase encounters a change, it goes through a series of checks and an automated check gate authenticates the changes before going live. Since the production environment is automated, changes are visible to the developers in real-time. This enables faster feedback so the team(s) can inspect and adapt in real-time.

Continuous Deployment pipeline consists of a feedback loop which demands Continuous monitoring of the process to identify the issues and enable corrective actions. Automating the entire process (all the way from code commit to going live) provides a competitive edge to the Business since their Time to Market (TTM) is always less. Teams that produce software using CI-CD practices are often cross-functional and operate in a collaborative environment, which incubates DevOps Culture. The tools available in the process make these code changes moving from one machine / environment to other easy and anxiety-free.

The terms Continuous Deployment and Continuous Delivery are often used interchangeably. Both are parts of modern software development lifecycle and share similar responsibilities which usually leads to confusion about their meaning and uses. To clear that common misconception, let us first know the definitions. 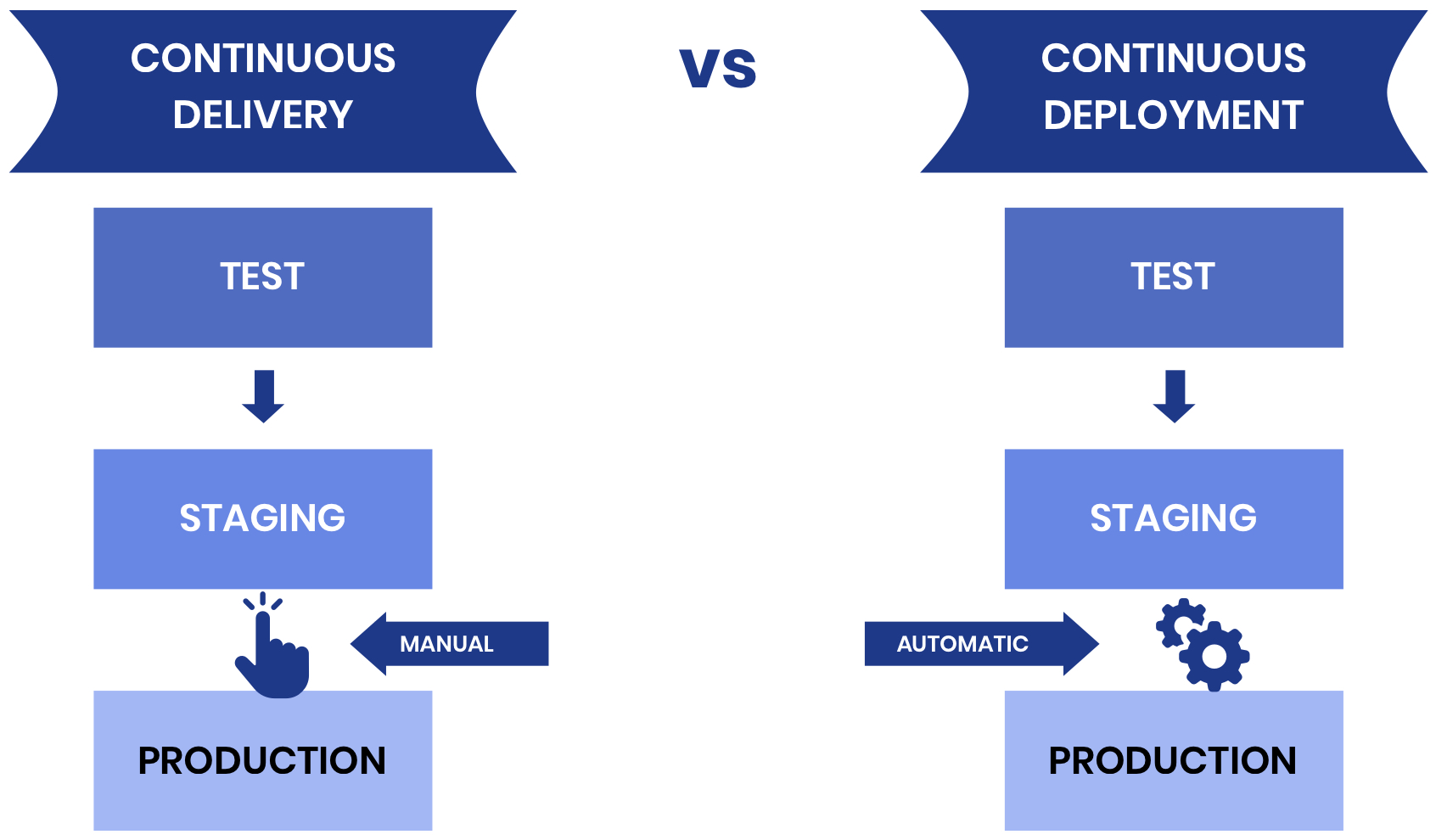 Continuous Delivery is a software development discipline with the ability to have a new piece of deployable software ready to be pushed into Production at any given point of time.

The end goal of Continuous Delivery is to make deployments a routine affair. It is up to the Business to decide and push the button when they want to go live in order to take advantage of their market dynamics. The process can, also, be fully automated and this leads to the next term.

Continuous Deployment is a process that releases any code commits into live environment. There is always a piece of code ready to merge, test and is on toe-tips for release. This is an end-to-end automated process and manual intervention is not required.

These processes are preceded by Continuous Integration, it is a process that develops, builds, and tests the code automatically. Both are linked to Agile and DevOps methodologies.

Our highest priority is to satisfy the customer through early and continuous delivery of valuable software.

- Principles behind the Agile Manifesto

The pipeline of Continuous Deployment consists of a series of steps that would take the code to production. All the steps are automated and the output of one step provides input to the next step. Continuous Monitoring ensures the code meets the pre-approved quality check gates and is bug-free. With this cycle in place, the main branch is always ready for release. Whenever new code is introduced to this automated pipeline, all the potential issues are detected and solved immediately which certifies the final version of the application to be error-free. It’s because of this aspect, many applications we use in our day-to-day life offer new features often.

The pipeline can be explained in 4 simple steps as endorsed by The Scaled Agile Framework (SAFe):

This is where the Continuous Integration ends, and Continuous Deployment starts. As the developers produce a new piece of code to the production environment, the deployment process automatically triggers, and we call it ‘a build is made’. The whole process from the code-commit to final deployment is ideally a one-click process in Continuous deployment. These 7 practices improve the efficiency of software deployment:

Toggles/Feature Flags: Enables switching between the old and new functionality without changing code.

Dark Launches: Releasing a new feature to a set of users without making an official announcement to monitor the load and feedback before actual release.

Deployment Automation: Automating the process of deploying the tested build from Check-in to production.

Self-Service Deployment: A single self-service command can help the team to deploy changes with little to no interaction of administrators of the target deployment environment.

Selective Deployment: Customizing the deployments to the production environment aiming at subsets of users based on their geographic location, roles, etc.

Blue/Green Deployments: Creating a (temporary) virtual twin of the production environment to avoid frictions and downtime.

Verifying the build/application before releasing is important in Continuous Deployment. Often last-minute verifications expose defects that were overlooked throughout the process and these need to be fixed immediately to achieve maximum impact. Various tests are performed to verify the application performance and avoid the chances of contaminating the production environment. Four key practices of the verification process are:

NFR: Testing the build for non-functional Requirements such as Security, Maintenance, and Performance.

Production Testing: Conducting automated tests after the application is deployed to production to ensure consistency of intended quality and functionality.

Test Data Management: Documenting the results of testing to back Version Control and Continuous Monitoring.

Constant Monitoring is the essential practice that ensures compliance and mitigates potentials risks in CD process. It helps in visualizing your application’s performance and/or any other parameter set by the project leaders. Monitoring increases the fidelity of assertions and increases responsiveness in the teams. These four aspects aid the monitoring process:

Control Panel: A detailed and preferably real-time dashboard where the progress and observations are displayed automatically.

Full stack Telemetry: A dynamic dashboard that collects, processes, and publishes data of Metrics through plugins that connects the entire tech stack of the system.

End-point Monitoring: Keeping an eye out for any malicious activity and data security flags at the endpoint.

User-behavior tracking: Collecting qualitative and quantitative user data by tracking their experience to analyze the interactions between the user and application.

The ability to respond is critical for the business agility. MTTR is a metric that defines your team’s readiness to respond to issues and remediate them. MTTR Vs MTTF are considered as important and decision-influencing metrics in agile software development. As soon as an issue or incident is discovered, the response should be immediate because otherwise, the business operations could be affected or worse, the brand value may be at stake. The root cause of the problem should be identified and resolved. Five practices that can enhance the team’s responsiveness:

Replay: Replaying the user’s session to research and identify the problem.

Proactive Detection: Creating faults to understand the state of system’s tolerance, identify vulnerabilities, and design solutions before even they occur.

Roll-Back: The ability of the system to identify the last best-known build and restoring it until the issues (often caused by change in new code) are fixed.

Infrastructure Control: refraining the teams from making configuration changes or production environment adjustments after deployments. Any change after the deployment would require a new version of architecture to be built and send to production. This eliminates post-production risks and improves predictability.

This Software Deployment tool from AWS family is a new favorite to many DevOps teams. The tool’s seamless git integrations, autoscaling hooks, application health tracking, and blue-green deployments are some of the best features of the tool. As it is language agnostic, it is easy for the teams to re-use the existing set-up code. AWS CodeDeploy is described as a fully managed CD platform that can automates software deployments from Amazon EC2, AWS Fargate, AWS Lambda, as well as the on-premises servers.

Price: Starts from $0.02 per on-premise instance and no additional charge for deployments to AWS computing services.

Marketed as one of the most easy-to-use platforms, Octopus Deploy is known for its automated runbooks which allows dev and ops teams to collaborate and operate from remote locations yet still be connected. Octopus Deploy offers Deployment as a Service. The tool works for both on-premise as well as cloud deployments and it allows multitenancy. Octopus Deploy is apparently used by 25,000 companies.

Price: Offers 10 free deployment targets and beyond that, their charges start from $9 / target / month on average.

DeployBot can be used for both manual and automated deployment processes. This Continuous Deployment tools works in sync with GitHub, Bitbucket, GitLab, and any other Git repository. It is often featured for its simple setup, tool integrations, and its preset scripts and commands.

Price: Free for up to 10 servers and one repository. The commercial model’s pricing starts from $25/month.

GitLab is a web-based DevOps lifecycle tool that enables planned and automated deployments. It is an open-source platform the supports parallel build and dockers. Known for its familiar interface, code collaboration and version control features, GitLab is easy to learn and easy to scale.

Price: GitLab offers a free version for individual users and their enterprise packages start from $19/user/month.

Jenkins is one of the leading and widely popular open-source automation tools that automates deployment process. This extensible automation server can be used as a simple CI server to build and test virtually, or it can be turned into a feature-rich continuous delivery hub based on the project requirements. This Java-based program comes with 1500+ community contributed plugins and offers supports distributed deployments from multiple machines.

Bamboo is a Continuous Integration – Continuous Delivery – Continuous Deployment tool from Atlassian, which can automate builds, tests, and releases in a single workflow. In addition to its seamless integration with multiple tools including Jira, Bitbucket, and fisheye; Bamboo encourages its users to enhance their CI pipeline using their 100+ addons and even lets them add their own.

Known for its seamless integration with Github and other VCS, CircleCI is a CI-CD tool that automates build, testing and deployment processes. CircleCI lets its users have complete control over the computing memory (RAM), resources and workflows for customized job orchestrations. Compared to its counterparts, this CI-CD tool displays great flexibility between the operating systems, and infrastructures. It is language agnostic and offers full-level virtual machine isolation for enhanced security.

Price: CircleCI charges on monthly bases and its packages starts from $30 / month.

Continuous Integration and Continuous Deployment are DevOps best practices because they address the misalignment between developers and operations teams. Developers want to keep up and push changes frequently and Operations want nothing more than a stable application. Now, with automation in place, both seem to be working in harmony. There is continuous testing to stabilize the delivery process, separate environment variables from the application, and automate rollback procedures wherever it is needed.

Getting started with CI-CD requires a mutually agreed cross-team collaboration on technologies, practices, and priorities. Would you like to know how CI-CD can shapeshift your application delivery and customer experience? Gte in touch with our DevOps Consultants by dropping us an email. info@qentelli.com