Talk to our experts about Continuous Integration

An Introduction to Continuous Integration 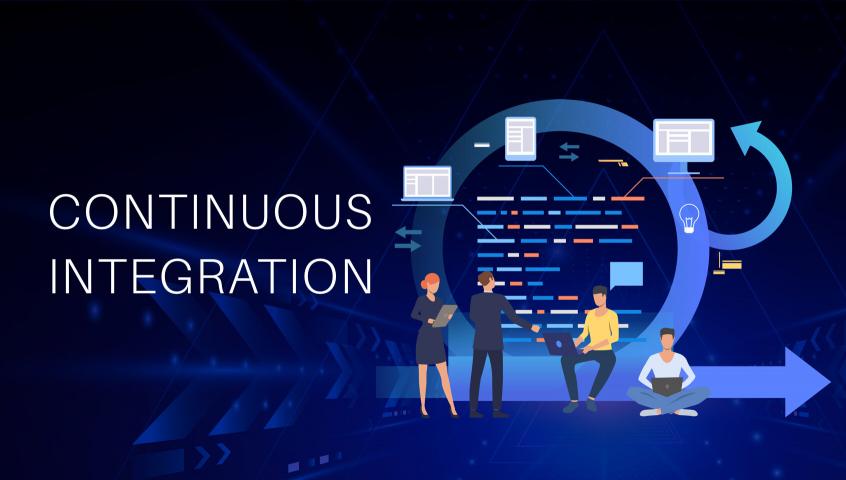 Continuous integration is a software development practice that is generally used by engineering teams to integrate the work they have been doing. This type of integration merges the code and helps in identifying the bugs that appear during the process. The development teams take care of the feedback immediately and pushes back the code to the mainline for further integration.

The main aim of implementing Continuous Integration is to reduce the tension around Integration, improve visibility, speed, and efficiency. Continuous Integration is one of the popular practices in Extreme Programming (XP) and when followed with other XP practices such as TDD, Refactoring etc can set you up on the pathway to practicing Continuous Delivery. One of the common setbacks of shared development models is, every developer connects to the same copy of the production database on the same server. This may lead to developers overwriting each other’s modifications. Continuous Integration helps in avoiding one developer’s work-in-progress from breaking into another developer’s copy. The deployment process becomes easy and fast as the developer makes sure that the application on the mainline is always ready.

Before the advent of CI, the task of merging the codes and testing them was difficult, time-consuming, and expensive as each code must be merged separately to check the features, and the results were not always favorable. With the advent of CI, the task of testing and merging became a simple, fast, and easy process. The software developers were able to save their energy, resources and focus on value addition.

The term Continuous Integration was first used by Grady Booch in 1994. Later, in 1997, Kent Beck and Ron Jeffries had brought the concept of Continuous Integration into practice while they were working on Chrysler Comprehensive Compensation System Project. They invented a framework called Extreme programming (XP), which included CI as a practice and advocated integrating the build as many times as needed.

When Grady invented it, it was not intended to use it for building the entire application. But later, with the increase in complexities of business procedures and coding systems, the process of automating and building the entire application became mandatory. Automating the testing and integration process improved software readiness while practicing version control and maintaining mainline helped to keep the code clean.

Getting started with Continuous Integration

When multiple developers and testers are involved, keeping track of the build, and orchestrating it at the time of deployments can get tricky. Source Code Management tools, configuration management, version control systems, repositories – call it anything but having a source code repository system improves code re-usability, minimizes messiness, and gives you control over the endless modifications.

Pro tip: Just because your mainline allows you, don’t abuse/overuse the branch creation. Try and have one mainline unless the project really demands for more.

Compiling your code, moving the files around, and loading the schemas into databases can be tedious each time you try to get your code into the mainline. Whether you work with UNIX, Java, or .Net, there are features to generate artifacts and you can build and launch your system using a single command. It is a necessary pre-condition for Continuous Integration.

Pro tip: Depending on your requirement, chose On-demand, Scheduled, or Triggered Automation.

In the rise of Test-Driven Development (TDD) practice, techniques like self-testing code have gained popularity and rightly so. This practice involves writing comprehensive automated tests along with the functional software. In the end, you will be able to test your code with fewer commands and it will cast light on the bugs if there are any.

Since the production environments could be slightly (sometimes even drastically) different from the developing environments, shipping the code from one to another can break its functionality. In Agile development, you’ll have to repeat the process at least once a day. To avoid ‘It’s your code’ / ‘No, it’s your machine’ disputes between Dev and Ops, automate your deployments. It saves time, reduces errors, and improves consistency.

Pro tip: Always set up a distinct build for each test suite and create a dominos effect by triggering each test case with the one before it. It is the easiest way to identify the problem and avoid shipping irregularities into the Prod environment.

If you have a habit of prioritizing tasks, nothing and absolutely nothing should be written above ‘fixing the broken code on the mainline’. The entire concept of Continuous Integration is about knowing that you're always developing on a known durable base.

Pro tip: Unless the root cause for the breakage is absolutely known and obvious, always take the mainline back to the last known good configuration and take the detected problem to the dev table to debug.

Bring in a Digital Twin of your Production Environment

This is another way to make deployments less stressful and more predictable. Not all, but most of the software upgrades are not reversible. So, cloning your production environment for testing can help you verify the components are working the way they are intended to let you fix everything that may pose a hurdle at the time of deployment.

Maintain the build together

When the promise is to have daily commits, there are always new builds in making. But only in an ideal world, the mainline stays healthy throughout the day. In reality, developers not updating the mainline before each commit or difference of environments between the developer systems can cause the build to break. So, it is advised to commit the regular builds on an integration machine first and only if this integration build succeeds, the commit should be considered done.

Pro tip: This can be executed manually or with the help of a Continuous Integration server. Although, the manual way looks simpler, adopting a CI server would give you an edge to practice Automation.

User stories are the most important part of the framework. Involving the developers while writing the user stories is the best way and it will also increase the quality of the test cases. Documenting the bugs after fixing them will help us avoid the reoccurrence of the bugs.

Enough has been written on the benefits of Continuous Integration. But, here are a few:

After the advent of Continuous Integration, many tools have come up. The tools automate the process and make the task easier and help in keeping track of the program. Some of the best available continuous integration tools are

Challenges and Solutions in adoption of Continuous Integration

Continuous Integration is one of the most popular XP practices for software development across the globe. There is no by-the-book recipe for implementing it nor a one-size-fits-all solution. Start with automating your build, establish source control and monitoring, and you’ll find your wind. It is a process of continuous exploration, learning, and implementation. But the bright side is the availability of various tools including open-source ones to get you started on the right foot.

Are you planning to implement Engineering practices from Extreme Programming? or looking to improve your DevOps maturity? Write to our team of DevOps Experts info@qentelli.com