Talk to our experts about DevOps Automation

DevOps Automation – 5 Areas that May Fall Prey to Over Automation 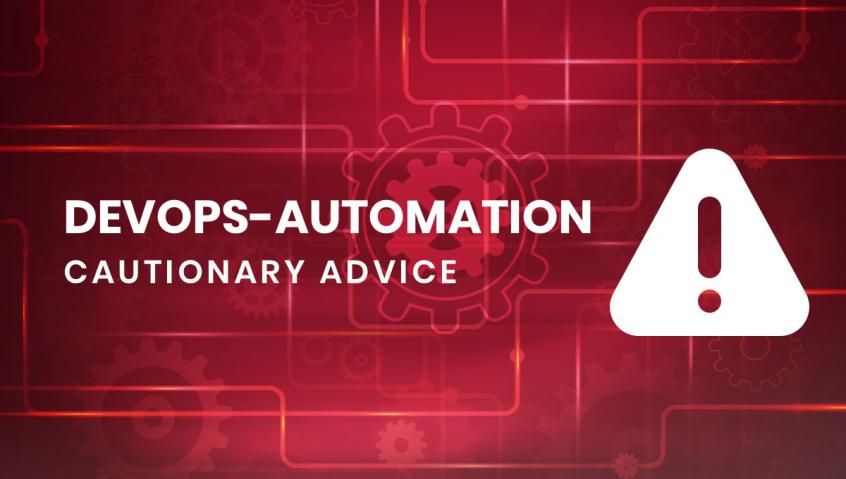 The word Automation sounds very exciting. It is modern, realistic and even a little dramatic in its tone. If it had a color, it would be Bright Red – the color of boldness, excitement, courage, and speed. To draw an analogy, any organization goes through similar feelings when implementing DevOps Automation. And why not! Automation saves time, increases quality, improves employee satisfaction, and optimizes costs for any organization.

But what if certain DevOps processes are Over-Automated or Wrongly Automated? Whereas the right automation magnifies efficiencies, over-automation can conceal the innovation element (Human Intellect) in the DevOps program. In this article, we are highlighting some common areas where organizations fall prey to DevOps Over-Automation and how to avoid them. In the end, we will also propose a comprehensive DevOps Automation approach.

Automating all the tests

Test Automation is an excellent achievement for DevOps teams. Test Automation means upholstering the quality of your working product and move it more quickly from one phase to another and is a good contributor to DevOps automation. But there is more to this story of Test Automation.

The availability of Test Automation success stories and the ever-growing tools landscape makes organizations believe that they found their magic bullet. As a result, they rush to automate everything in testing. While they expect green CI-CD pipelines, increasing test coverage, a growing number of automated test cases, and empowered testing teams; The results are opposite – Choked CI-CD pipelines, Delayed feedbacks, Bug slippages, Increased testing inefficiencies, and Casual approach of testers due to over-dependency on Automation.

World’s largest quick-service restaurant chain with a legacy monolithic POS windows-based application faced multiple challenges while automating their tests. The application was deployed across 15000+ stores around the globe and a single testing cycle was 6-8 weeks. With multiple languages, currency, and a multitude of configurations, their automation initiatives went in vain.

A rightly automated build compiles computer source code into binary code, package it, & run automated tests. The build then gets merged with the main code. Does that sound like a perfect CI story? Wait!

The initial set of build workflows were working fine, but then the team added multiple tests to existing workflows. With multiple alerts and notifications for each check-in, a simple workflow becomes over-complicated and time-consuming.

Automation smitten teams add all tests and notifications to build pipelines. They overlook the fact that adding unnecessary tests will add to build compilation and running time. Also, configuring multiple notifications inundate developers and they start overlooking even the important alerts. Imagine, a ten-hour build process against a half an hour build process. Such bloated builds delay feedback adding to the developers’ inefficiencies. The Build Automation instance points to the habit of using Automation superfluously.

Instead, evaluate your code check-in frequencies, branching strategy, and the team’s comfort level in Build Automation. This ensures correct automation of Build Processes.

Infrastructure Automation serves as a force multiplier for DevOps Automation. However, indiscriminate automation comes at a premium of unmanaged environments and IT inefficiencies & costs. Several scenarios where organizations should avoid Over-Automation are:

The overriding lesson is to use Infrastructure Automation to decrease downtimes, increase self-service capabilities, empower Ops, and maintaining a solid (99.9999%) uptime.

Smooth Deployment is like a dream come true for DevOps teams. It acts as a bridge between Value Generated and Value Delivered. But with exaggerated Automation, the whole release can be botched turning a dream into a nightmare. The inflated Deployment Automation can slow-down the release, put operations on firefighting mode after every release, and make roll-back processes time-taking and tedious.

Follow a manual check-gate to ensure security, reliability, and compliance considerations are taken care of before the deployment.

With the rise of cyber-security threats, this is the most dreaded aspect of DevOps Automation. Security is integrated within DevOps pipelines, but a single automation error can put a company’s existence at risk. Automating Routine security checks and identifying potential breach attempts is a good practice. However, there are several areas, where automation can create more security problems than it solves.

For Security Automation, it is highly advisable to involve human counterparts in critical tasks. Also validating every automated change can enhance security posture.

Towards a Balanced DevOps Automation

1. DevOps Vision – The success of DevOps is not dependent on tools and level of Automation but a defined vision and strategy to achieve business value. Bring stakeholders together to understand the business outcomes expected from DevOps. The clear vision helps in determining the level of Automation and timelines.

2. DevOps Assessment and Strategy – In step two take your DevOps vision and match it against current DevOps capabilities and maturity level. Get all stakeholders together to determine the future state of DevOps and existing gaps. Additionally, determine DevOps Automation Areas, Strategy, and Roadmap. Initially, keep the Automation scope constrained so it does not block the vision of the overall DevOps program.

3. Pilot Framework and Tools – Building a DevOps pilot framework helps in predicting the success and failure of the program. While building a DevOps pilot, generate an Automation blueprint that outlines tools and technologies, industry-specific solutions, and integration and implementation timelines. Initiate DevOps automation with limited Automation in these areas:

4. DevOps Implementation – With the DevOps pilot up and running, the next step is to start scaling DevOps organization-wide. DevOps implementation and Automation will go together across all stages to align standard practices, orchestrated workflows, and foster culture change. Here are a few best practices to apply right amount of DevOps automation:

Define an overarching DevOps Automation strategy, tools, skill gaps and tie them to organizational objectives. Be it Build Automation, Infrastructure Automation, or Deployment select a single process to automate and showcase business outcomes.

Build pilots that get noticed and document them. The documented Automation use cases serve as a source of truth and learning tools to scale DevOps Automation capabilities.

Create a center of excellence with the DevOps program to apply a methodical approach towards DevOps Automation rather than rushing into it.

Continuously communicate with your teams about the pros and cons of Automation as well as over-dependence on DevOps Automation.

5. DevOps Evolution – The DevOps process is all about improving the speed and quality of outcomes and enabling continuous learning. There is no finish line but there is always room for improving your DevOps Automation practices. Culture and communication play the key role in DevOps Evolution.

How Qentelli can help in your DevOps Automation Journey?

Our DevOps Assessments, Automation guidance, and be-spoke Implementation services with periodic assessments help clients apply even and level-headed Automation. Skeptical about your DevOps Automation Approach? We can help! Reach out at info@qentelli.com