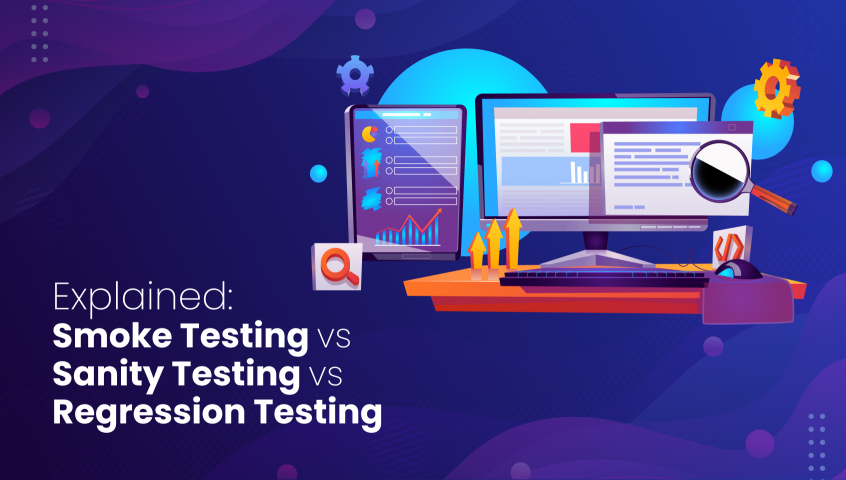 If you are here to read this article, it would be safe for us to assume that you know that every business, to stay competitive and relevant, has been working effortlessly to build software that provides the best end-user experience.

Regardless of the business, the demand for superior software must reduce both the time consumed and the cost incurred to build it. While there are several steps to build the perfect software, the primary steps before its release remain testing!

Testing ensures that the software is effective, reliable, and efficient, all at the same time. The three basic concepts of testing during the development stage to ensure those criteria are met are smoke, sanity, and regression testing. All these concepts need to be used at various stages of the development process and each comes with its aims and purpose.

Your testing team will outline the usage of each of these testing concepts based on various factors such as the software’s functionality, the testing objective, the complexity, and last but not the least, the available budget.

Before we delve deeper into how these three testing methods differ, we must explain what a software build is.

Can you think of the primary component of building software? Well, yes, we are talking about the code. But we know that it is not just one code that builds the entire software. There are thousands of source code files depending on the complexity of the software. Needless to mention, these source codes need to be compiled into a single executable file, which can be shared with the release team to be deployed. The process of compiling these source code files into a single file is called a software build. It is pretty literal here because it is the process where the software is built to implement it.

Smoke testing is carried out in the initial stages of the software development life cycle (SDLC). It ensures that all the core functionalities of the program are working seamlessly and cohesively. Smoke testing is executed before any functional tests are done.

The intent of smoke testing is not deep testing. It just rules out any errors in the core of the software. It largely detects and provides testing teams insights into poor builds at the primary stages to avoid bigger challenges in the later stages of the SDLC.

Also known as the build verification test, smoke testing tests for issues in critical areas of the software build than the complete application. It is carried out by both the testers and developers because of its ease and less time commitment. It is part of the rigorous testing process and uses test cases to check all important components of the build.

Smoke testing is performed when the developers provide a fresh build to the Quality Assurance teams. However, there is no limitation of it being performed only at a start of a new project. In case there are new module additions to existing functionality, smoke testing will still do its job!

Smoke testing is carried out much before automation test cases can be run on a software build. In case an organization has continuous testing built-in, smoke testing is as good as checking the successful installation of the build for the execution of the first test case. If you haven’t yet, please consider automating smoke tests since this will help run the tests quicker resulting in faster feedback look so you can work on them immediately.

Sanity testing is executed to determine if new module additions to an existing software build are stable enough to pass to the next level of testing. Also known as Surface Level Testing, this must be done to quickly evaluate the quality of regressions made to the software. In case of minor changes to the code, sanity tests further clarify whether the end-to-end testing of the build can be carried out seamlessly.

Sanity tests also ensure that any changes made do not impact other functionalities of the software build. In QA, sanity testing is part of regression testing. It is a stage after the smoke test is carried out.

Sanity testing too can be automated since it is a subset of regression testing.

A superset of smoke and sanity testing, regression testing is a process that confirms whether an application functions as expected after any improvements, updates or code changes. It is responsible for the overall stability of the existing features of the build. When a modification is made, a regression test will ensure if it will remain sustainable under continuous improvements.

When regression testing, always ensure that the code under test is under a configuration management tool and should be changed when the test is ongoing. Additionally, the QA team should only use an isolated database.

Smoke and Sanity testing are less time-consuming and check the core functionalities of the code, along with checking eligibility for further tests. Regression tests on the other hand check the overall quality after a modification is made to an existing code and ensuring the change does not impact other related areas.

In practice, all QA teams need to do smoke, sanity, and regression testing. However, with the increasing number of tests, it becomes challenging to maintain them. All these tests get executed multiple times by the QA teams and automating these tests are standard practice in a modern development process.  When opting for automation, get a tool that has the right ROI right from the start.