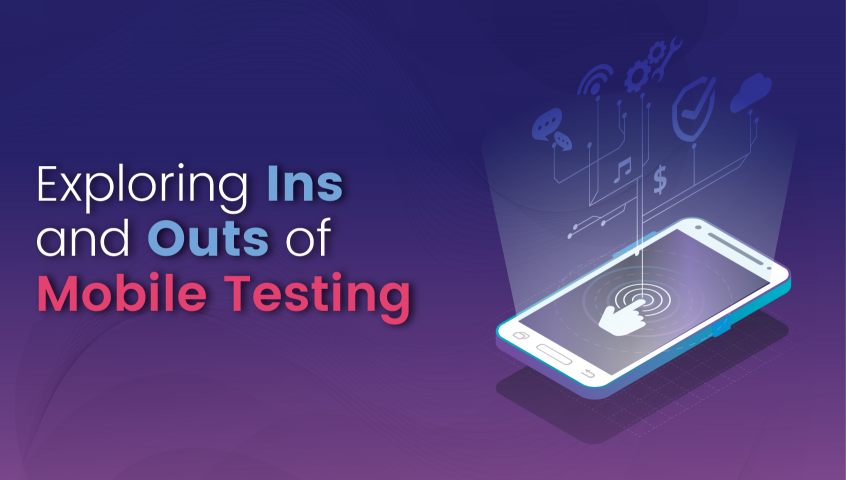 One can leave home without a wallet, but not without a mobile phone. This tiny, sleek, and smart gadget has become an integral part of our lifestyle, with our days beginning and ending with it. It has transformed our lives in ways that go beyond texts and calls. It has become our confidant, partner in crime, and understands us like no one else.

But, how did a machine made with chips and processors become this important? Important to an extent where we check them around 150 times a day! What makes mobile phones so addictive and reliant? The answer is - Apps.

Application: Revolutionizing the way we use mobile phones

There was a time when mobile phones were simple, boring, and non-versatile. They were designed to do the basic task of making and answering phone calls. Eventually, apps got introduced in mobile phones, and from a plain gadget, they became a lifeline. Dependency on mobile phones skyrocketed, and things that were once considered exclusive to a domain became accessible. In the times when mobile and mobile applications have become so crucial, seamless Mobile Testing is essential and pivotal.

Mobile Testing encompasses a broad range of testing methods, from general to mobile-specific ones. While generic tests are run to check the stability, usability, security, performance, and functionality of the app, specific tests are executed to check for the interruption, memory leakage, location, certification among others. The process can either be automated or done manually. When choosing between manual and automated testing, one should note that automation and manual testing aren't rivals. Rather they work in synergy and based on business requirements, they are deployed in the system. 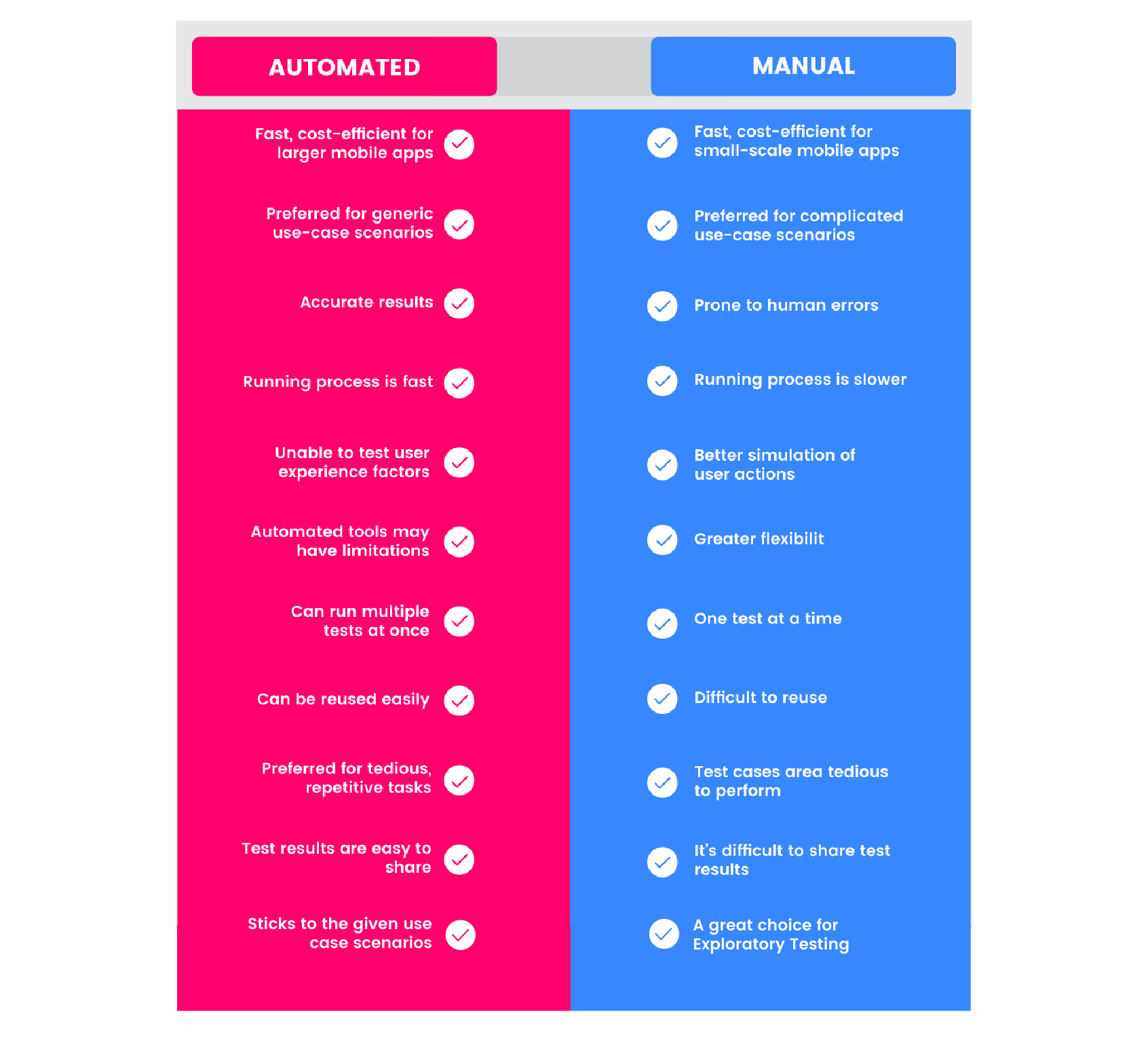 Usability Testing: There is no point in working on an app that doesn't solve problems or facilitate users' matters. Usability means, checking if the app is accomplishing its basic objective, i.e. making users' life easy. The test checks for ease of use, looks for bugs, and eliminates pain points. The test involves placing the application in a near-to-live scenario and jotting the responses. The usability test is most successful when the responses, directly collected from the live market, are taken into consideration.

Performance Testing: A great user experience is incomplete without other crucial elements like speed, stability, and scalability. Performance Testing checks the app's performance at peak traffic loads and ensures that the response rate and experience remain unaffected by any volatility. It mitigates issues like slow response, low speed, poor stability, and lack of reliability under possible heavy load situations.

Functional Testing: It aims to verify if all functions are behaving as intended. It focuses on business flows, UI, and cross-platform coverage. The app is a failure if the functions provided aren't flawless. It won't take users a minute to switch to another platform along with a negative comment on your timeline. Therefore, before launching the app or pushing an update, it's important to check aspects like ease of signing up, smooth installation, and trouble-free rendering of push notifications, among others.

Security Testing: Customers are very particular about their data and privacy. And the onus of ensuring safety lies on the creator of the app. Statistics suggest that over 80 percent of users would uninstall an app over security concerns.Given the ethical and business sentiments involved, security testing is imperative. This type of mobile testing works on sealing loopholes in the app that may lead to data loss. The test aims at identifying threats that may make users’ data vulnerable to cyber-attack, or data breaches.

Compatibility Testing: With various operating systems, and hardware-software configurations debuting in the market, it's important to run the compatibility test. This discipline checks for the suitability of the app with different mobile devices. It also verifies the functioning of the mobile app with various versions of the Operating Systems, browsers, networks, and related variables.

Localization Testing: This test intends to check the app's adaptability to a region. It validates linguistic, localized features, UI, local currency, time zone, and other aspects of a specific region, locale, or culture. 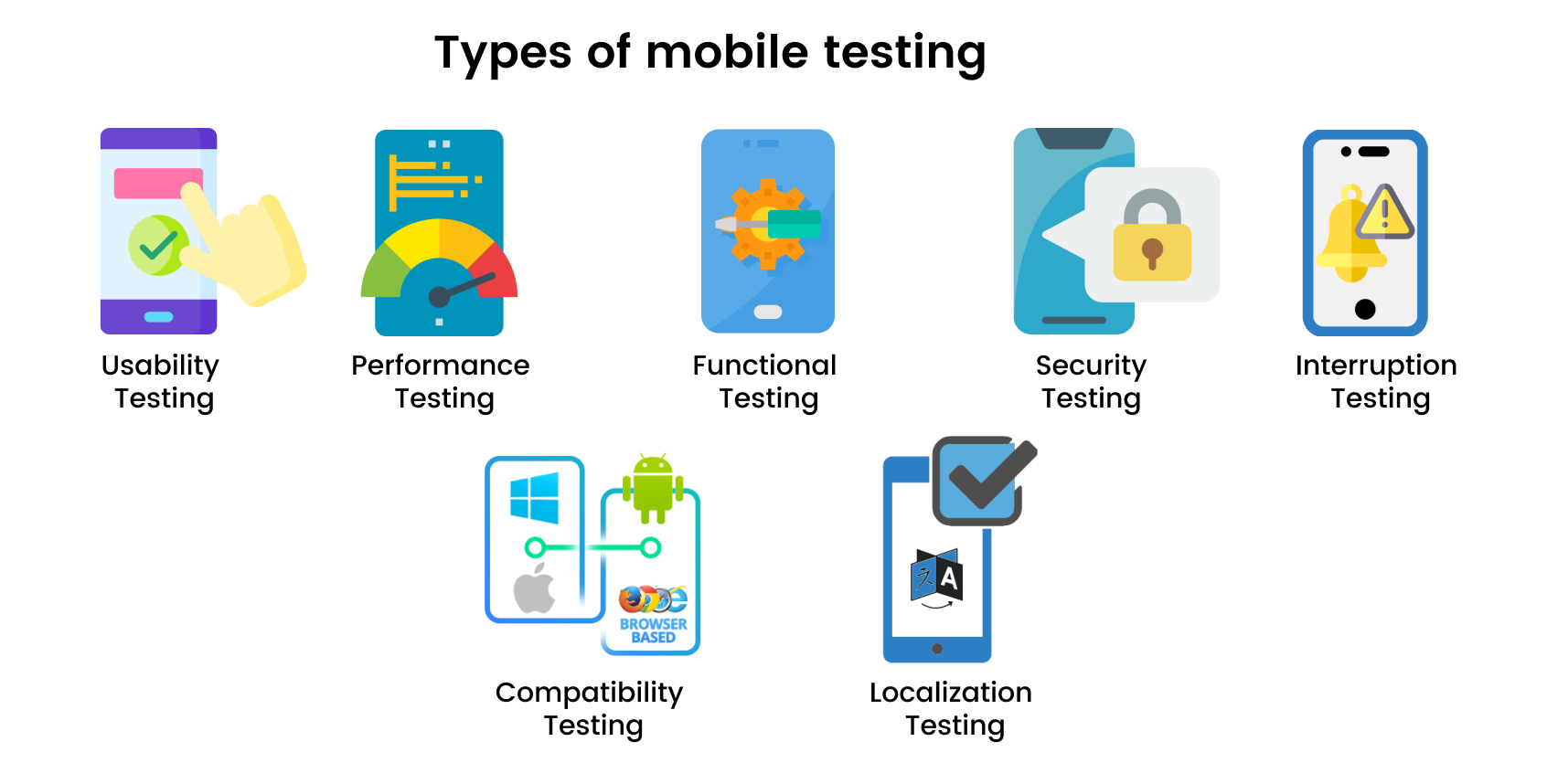 The competition in the mobile application market is immense and to avert pitfalls, creating a testing roadmap is essential. Planning in advance and following the laid procedure will help you achieve goals faster. Here is what a typical testing process looks like:

Drafting process: To taste success it's very important to have an outline and timeline in hand. A detailed draft of the entire process will help the company define goals and deadlines for every phase of the testing life cycle. The draft should mention the types of tests required for the app, an action plan for unforeseen complications, and a compatibility matrix.

Choosing tests for Manual and Automated Testing: The next step is to design test cases and execute manual and automated testing. While deciding on manual or automated testing, it is advisable to take a holistic approach and understand the requirements. Automation is preferred where speed, accuracy, and reliability are priority, while manual testing works best for dynamic, critical, and creative engineering spaces.

On technical aspects, your product might be the best in the market, but if your app isn’t helping end-user to complete its desired tasks, then it’s a failure at so many levels. Hence, usability test is paramount. Once the app is checked for user-friendliness and intuitiveness, its Beta version is released. In Beta testing, the product is rolled out to a small percentage of users. It allows the company to record user feedback in a live environment before launching the final version for everyone.

Performance Testing: Check for performance of application feature-by-feature, and then that of the entire system. This step in the testing process evaluates the product on parameters like -- speed, scalability, and stability under heavy traffic.

Complete Testing and Closure: In the last phase of mobile testing, developers run end-to-end testing, and ensure that the app is bug-free and ready for release to app stores. 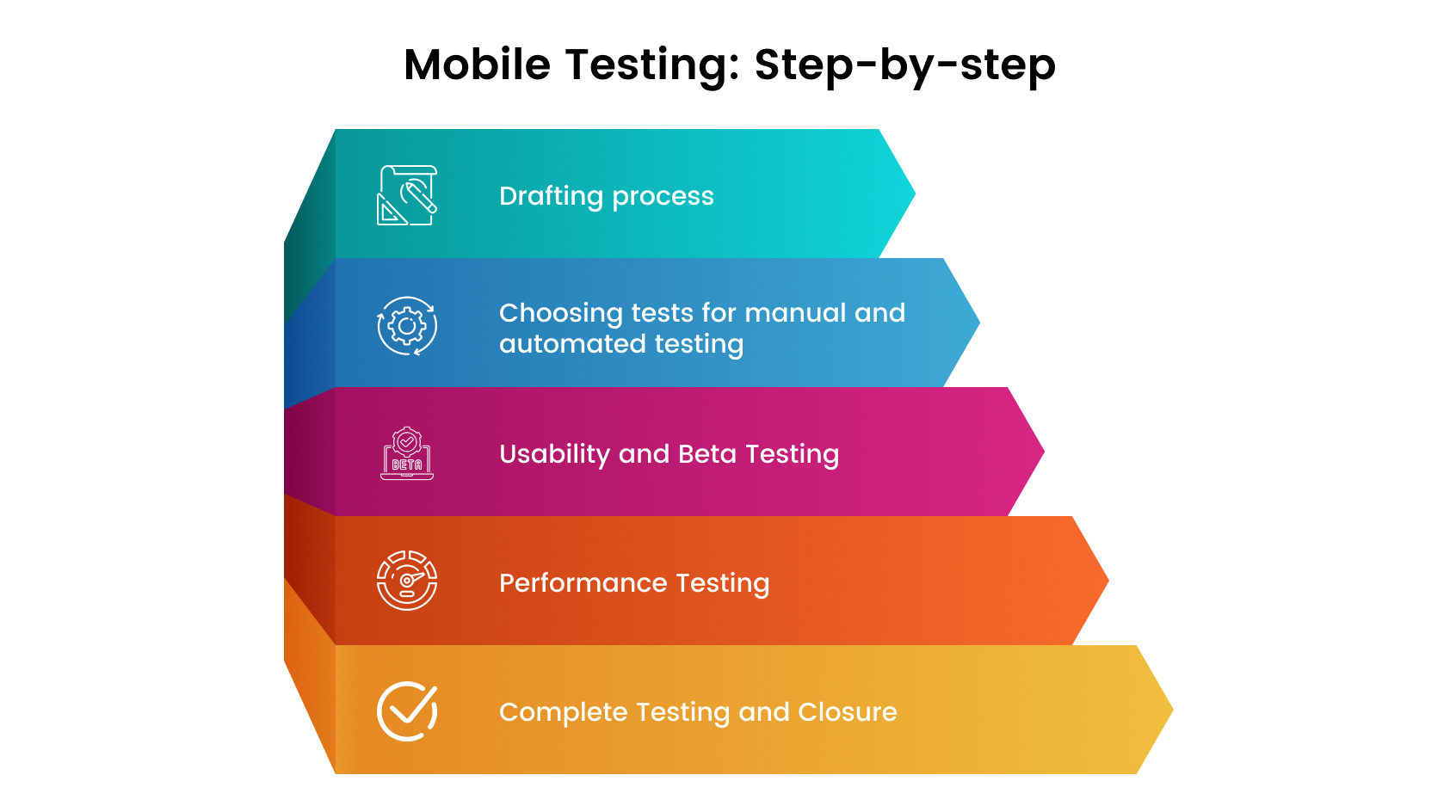 MoBe: It's a Mobile Test Automation framework that helps firms accelerate their automation efforts. It's developed by Qentelli and works on both iOS and Android platforms. It intends to capture screenshots for test scenarios that can be used by developers and testers during the software development lifecycle. The primary goal is to identify test flows that can be grouped into custom categories and executed based on the organization’s process.

The mobile testing strategies rely on diverse and complex parameters like operating systems, types of mobile devices, etc. Testing apps for efficiency, reliability, and security often is a costly, and time-consuming process. To overcome the problem, organizations opt for automated testing. Let's have a look at the top automation testing tools for mobile applications.

Appium: It's an open-source framework for automating native, hybrid, and mobile web apps. It allows the Quality Assurance team to test on popular mobile platforms like Android, iOS, and Windows. The tool is also designed for automated functional testing that enhances the overall functionality of the mobile app.

Test Complete: It's a UI automation tool that allows the testers to build, maintain and execute test scripts for desktop, web, and mobile applications. It enables QAs to run recurring UI tests over the application platform.

Espresso: This Google product is a native framework for Android automated testing. It gives testers the ability to develop tests that are close to the Android app’s logic. Its simple workflow and fast feedback mechanism make it a popular choice for Android testing.

Quantum: Quantum is an open-sourced, cross-platform test automation framework that lets both testers and developers easily create tests across native and web-based apps.

In the highly competitive world of mobiles, nothing less than excellence can be marketed. The high demand and expectations have pushed the developers and QA teams to deliver supremacy at lightning speed. Therefore, it's not hard to envision the enormous challenges that these benchmarks pose to the backend team.

Let's have a closer look at the main challenges faced by the testers to successfully perform Mobile Testing.

Multiple devices: Global market is flooded with a variety of mobile devices ranging from smartphones to wearables. The huge diversity creates trouble for the testing team since the app is expected to perform smoothly across all types of devices.

The testers need to check the app's compatibility with (almost) all the variants available worldwide using extensive tech units and iterative rounds of testing.

Different Operating Systems: Checking the apps for each operating system available in the market is a big challenge for QA engineers.

The app should not only run smoothly over the OS but also on its versions.  A feature that is working fine in Android Jellybean may not function in the Android Lollipop version! Testers need to take all such scenarios into account while ticking all the boxes.

Varied Screen Size: Another variable in the market is screen size. For a long time, the screen size has been a crucial selling pitch for mobile manufacturers. Depending upon the needs and choices of the mobile users, manufacturers launch devices in various sizes.

Testers invest a huge amount of time and effort in ensuring that the UI, and performance of the app is consistent across all devices and don't behave abruptly on different screen sizes.

Numerous app testing tools: While most of the testing can be automated, choosing the right tool, or set of tools can be difficult. Analyzing which framework will work best for your business is a time-consuming process. Moreover, just selecting one tool might not solve the purpose. Often organizations have to pick various kinds of tools, for various testing which can mount a load on the budget.

Heavy battery usage: Users these days are particular about battery usage. Apps that consume a lot of battery are not preferred and often get disabled or uninstalled by users. To overcome the challenge, testers ensure that the application can run on almost any battery without draining it.

Over the last decade, the usage of mobile devices has skyrocketed. And with apps enhancing the utility of the devices, the significance of mobile testing has gone far beyond.

The product should reach the maximum – it’s the ultimate goal of the organization. To realize this purpose, the primary step would be to check if the product is free of bugs and faults. The process enables organizations to build promising applications that are scalable and compatible across platforms. It saves enterprises from the public embarrassment that could have been raised out of disability in functioning, usability, or consistency in a LIVE environment.

While competition is in every industry, it’s immense in the crowded market of mobiles and smart devices. Therefore, enterprises need to look beyond making a reliable product that surpasses user expectations but eye on setting new benchmarks to ace the game.

Need expert advice? Qentelli has a proven record of successfully transforming businesses and bringing them closer to their digital, operational, quality, and data objectives. Our experts are just a mail away. info@qentelli.com