Talk to our experts about Test Automation Framework

ETL Testing: What It Is And Why It Is Important

The Nitty-Gritty of Quality Assurance

Leveraging AI in Banking – A Guide

8 Reasons Why RPA Projects Fail and How to Avoid them

How to Develop a Test Automation Framework?

A Test Automation Framework furnishes an environment where all the automated test scripts are executed. The framework assists its users to build, carry out tasks, procedures, and reports of their test automation scripts coherently.

Organizations find the Test Automation Framework as a cornerstone that helps them to integrate - Coding standards, guidelines, process & practices, modularity & reusability, reporting. Most of the frameworks are easy to follow, scalable, provides easy scripting, low maintenance, and so on. Sometimes implementing multiple Test Automation Frameworks can also improve an existing automation test strategy to a considerable level. 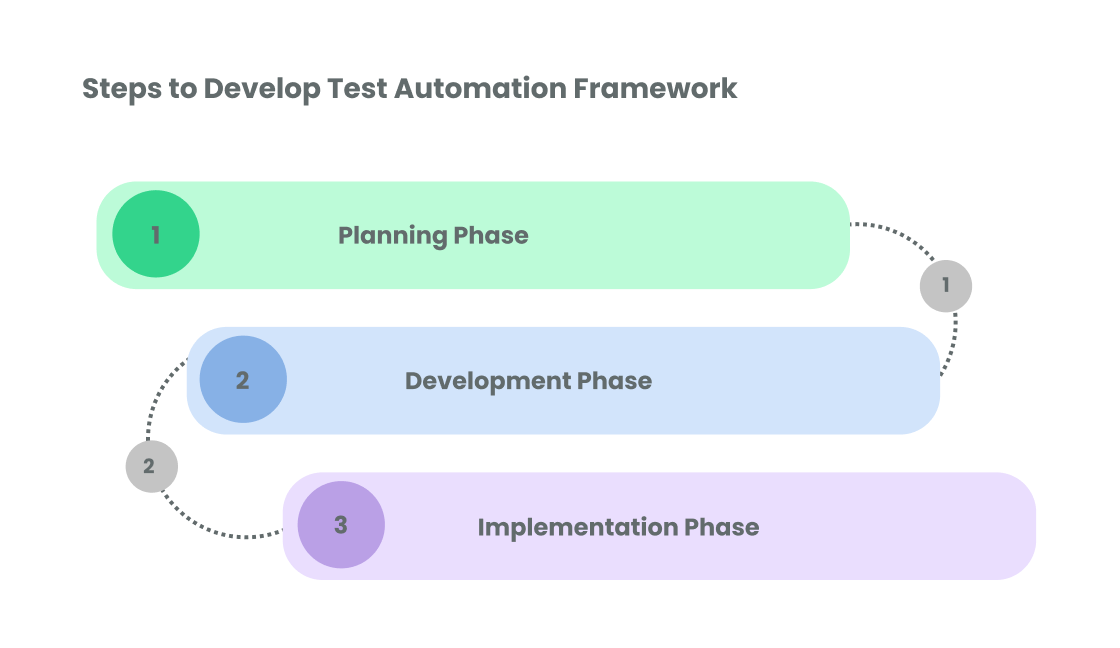 This phase acts as a foundation for your testing strategies. For an optimized result, the planning phase must be sketched with utmost care.

For measuring an ROI note down the things you would want to execute the test cases and then measure if the Test Automation Framework would provide a higher ROI. A high ROI would indicate that the chosen framework is beneficial for the project.

This phase deals with how the Test Automation Framework would be designed as per your project environment.

Before designing a Test Automation Framework, it is essential to take mental notes on its potential challenges and benefits. It is recommended to brainstorm - How, and what customer’s pain points would be solved by the framework. Hence, an experienced set of engineers, preferably Automation Architects must get involved early in the design process.

Designing would also means choosing a framework as per your needs. Let us visit some of the popular Test Automation Frameworks: 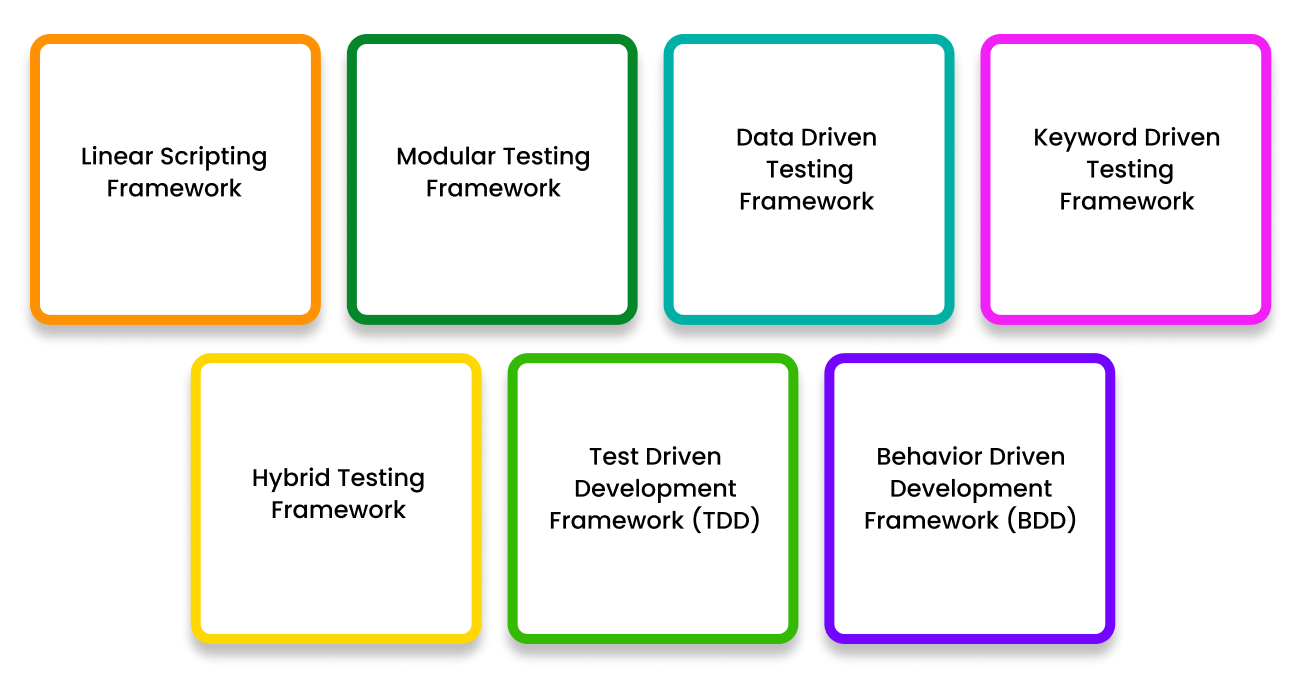 If Test Automation Frameworks are not implemented properly, they would not provide any valuable result. A testing framework should be implemented and used as part of your product lifecycle. It is recommended to always do a two-step code review and continuously following business-standard.

Some of the useful implementation steps are:

Whether choosing an open-source or commercial Test Automation Framework (TAF) tool or implementing a superior test framework, everything comes down to having a strong test framework core. A TAF Component is the core of a test framework. It is recommended to include relevant or even multiple TAF Components for achieving an ideal TAF.

Some of the popular Test Automation Framework Components are: 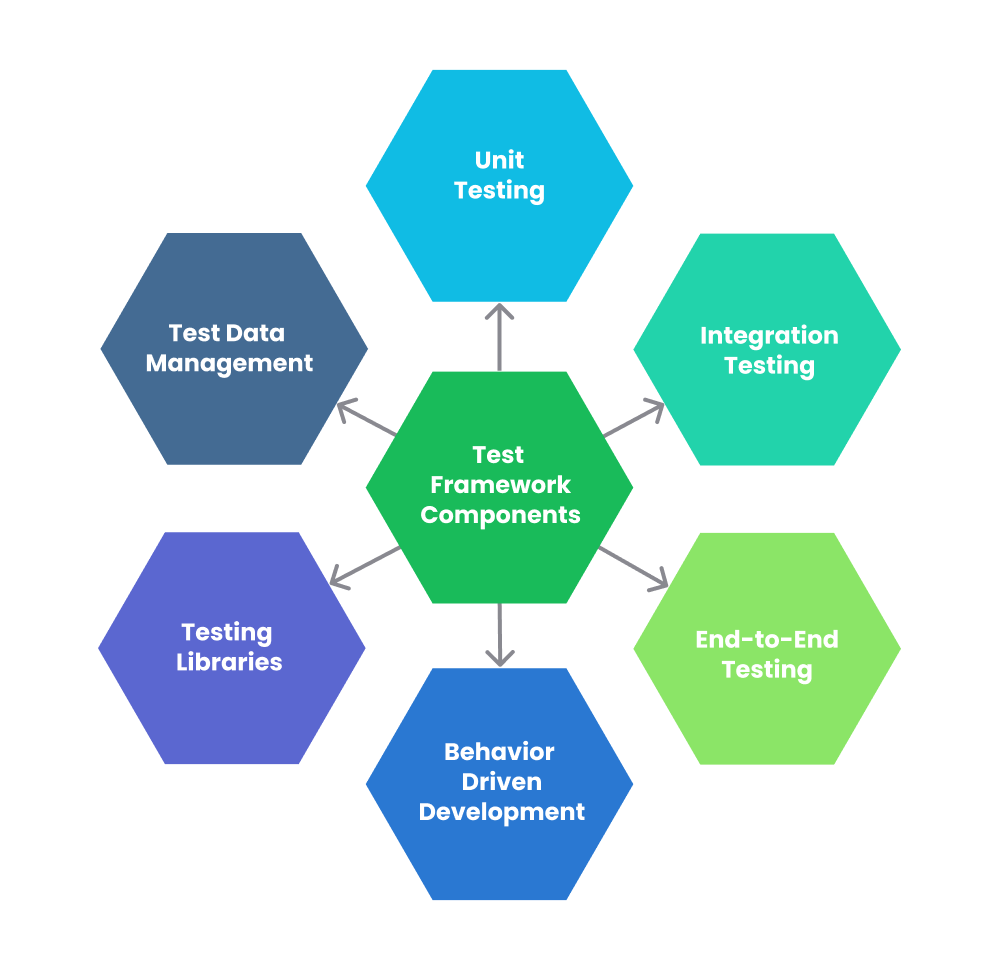 It is one of the simplest ways to run test cases. This is used to test the individual units of source code to ensure each unit performs as expected. Unit test libraries are used by testers and developers for better code production. These libraries can be used by standardized parameters. It is recommended for developers to unit test each module for risk minimization.

A software product is usually divided into multiple units which are worked on by multiple developers. Integration testing helps aggregate all those units logically and test them accordingly. This detects the strength of interactivity between the units. That decides how a product will work as an overall unit.

Quite similar yet different from integration testing is end-to-end testing. Where a user flow is tested right from the beginning to an end. It also replicates real-world situations while testing the overall software user flow. It might also help with external application integration.

One of the problems with the unit/endpoint testing is that it needs to be updated with any change in the code. In the case of a lot of code changes unit and endpoint, testing becomes cumbersome. Thus, BDD practices come to the rescue by easily handling subsequent code changes and helps in writing great test cases. In Agile software development, BDD encourages collaboration among Devs, QA and business stakeholders.

Often extracting information from data can become one of the toughest challenges. Test libraries and plugins usually help with data scavenging. An appropriate test data defines the success of your test automation. Test Data Management produce non-production data that are very close to the real environment so that system testing can happen close to the real environment.

How to opt for a Test Automation Framework?

An appropriate Test Automation Framework is selected based on:

An appropriate Test Automation Framework tool would save a lot of the team’s time and effort. Organizations must choose a relevant tool based on their need, training resources, and project budget. They must then focus on test framework development steps. While selecting a Test Automation Framework and its implementation one must check if automation is the need of the hour. As in some cases, automation might not be a good solution. Thus, test automation can only do its magic when implemented for the right process.

Talk to our pundits (Quality Engineers) in case you are looking for that fine QE market leader to successfully transform your digital landscape.