Talk to our experts about Self-healing test automation can improve your software delivery process? 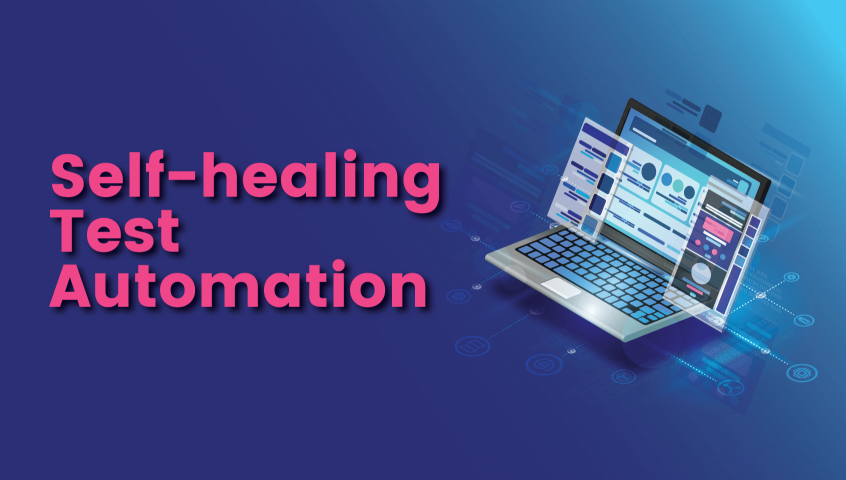 With test automation, it’s not uncommon to find the majority of your tests run successfully and provide the results you need on the first try; but when those occasional flaky tests cause your build to fail, it can be quite frustrating! Fortunately, self-healing test automation means you no longer have to put up with this issue; if your test fails or reports unexpected results, it will attempt to fix itself before it fails your build. Let's look at how self-healing test automation works and what it can do for you and your software delivery process!

Revolutionary effects of automated testing on the industry

Test automation has emerged as a leading force in the industry due to its many advantages over manual testing the most important of which is optimized operational costs and is now widely accepted as the standard approach to vetting software. Automation testing services improve the effectiveness and precision of testing software while also decreasing test turnaround time and testing costs. With the proliferation of web and mobile applications comes a rising need to spend in integrating technologies like AI and ML, which is expected to drive the software testing services market to a whopping $ 34.49 billion by 2024, according to Technavio. Automated testing is becoming more popular in the business world as a means to reduce operational costs and increase quality assurance and product delivery.

Specifying test environments is becoming increasingly important as software development shifts to include Engineering best practices like Continuous Delivery, TDD etc and other cutting-edge capabilities. Current testing practices have not yet reached a point where businesses can accurately model and manage their testing capacities. Nowadays, testing entails more than just looking for issues to fix; it also includes foreseeing potential roadblocks and mitigating them to guarantee the product performs as expected. Rapid adoption of test automation practices can be attributed to their ability to help testers verify that a product is up to par in terms of quality, security, and compliance with minimal time and effort. The addition of self-healing test automation opens up new ways to improve and speed up the entire software delivery pipeline – icing on the cake if you will!

Due to the advancement of technologies like natural language processing and machine learning, scripts are now able to "learn" and adapt. Using AI and ML algorithms, self-healing test automation technologies are able to dynamically adjust to changes that may occur in an application. Whenever a test is executed, they conduct a thorough search of the application's UI for any pre-existing objects. Then, the results are compared to the model of the application used in the automated tests. If any modifications to the application are detected, there is a capability that allows tests to be modified automatically. This is referred to as "self-healing". So, how exactly does self-healing perform? The internal scripts self-heal during runtime and the changes are automatically detected. Then self-healing test automation engine senses and records user actions in a language the tester can understand, and then replays it to replicate the user's experience. The program automatically remaps the objects, enabling faultless test execution with no human interaction.

When should you start using it?

There are no hard and fast rules on when you should start using self-healing test automation. The best approach is to continuously monitor your existing software delivery process, measuring metrics such as speed, success rate, and maintainability of automated tests. For example, if an issue arises in a CI build or at a release gate where critical code gets broken, then it’s time for self-healing test automation. If you already have manual regression testing in place, then it might be easier to integrate with your existing framework rather than starting from scratch. If not, then consider adopting a new testing framework that offers out-of-the-box support for self-healing test automation. As always, there’s no one-size-fits-all solution; it depends on your organization’s needs and current setup.

Self-healing automation tests increase your application’s test coverage while reducing the testing effort. If you have a long list of application requirements, implement self-healing automation tests to ensure you don’t miss any of them in your manual and exploratory testing. This approach also improves your overall test suite performance, making it easier for you to find and squash bugs quickly.

This is the most important thing you need to know. Self-healing mechanisms are simple to implement, but you will waste time unless you first identify the root causes of the problems your application is experiencing in production. To begin, set up an automated alert system to determine which types of errors occur most frequently.

While automatic error recovery is a great feature, it is always preferable to avoid errors in the first place. If you want to get to the bottom of the problems you've identified and fix them completely, you must take a holistic approach.

How does self-healing test automation add value to your software delivery process?

To create a reliable upkeep procedure for automated testing, self-healing is crucial. Adopting a well-planned maintenance strategy unburdens testers of a myriad of menial, repetitive tasks and endless edits to test scripts. 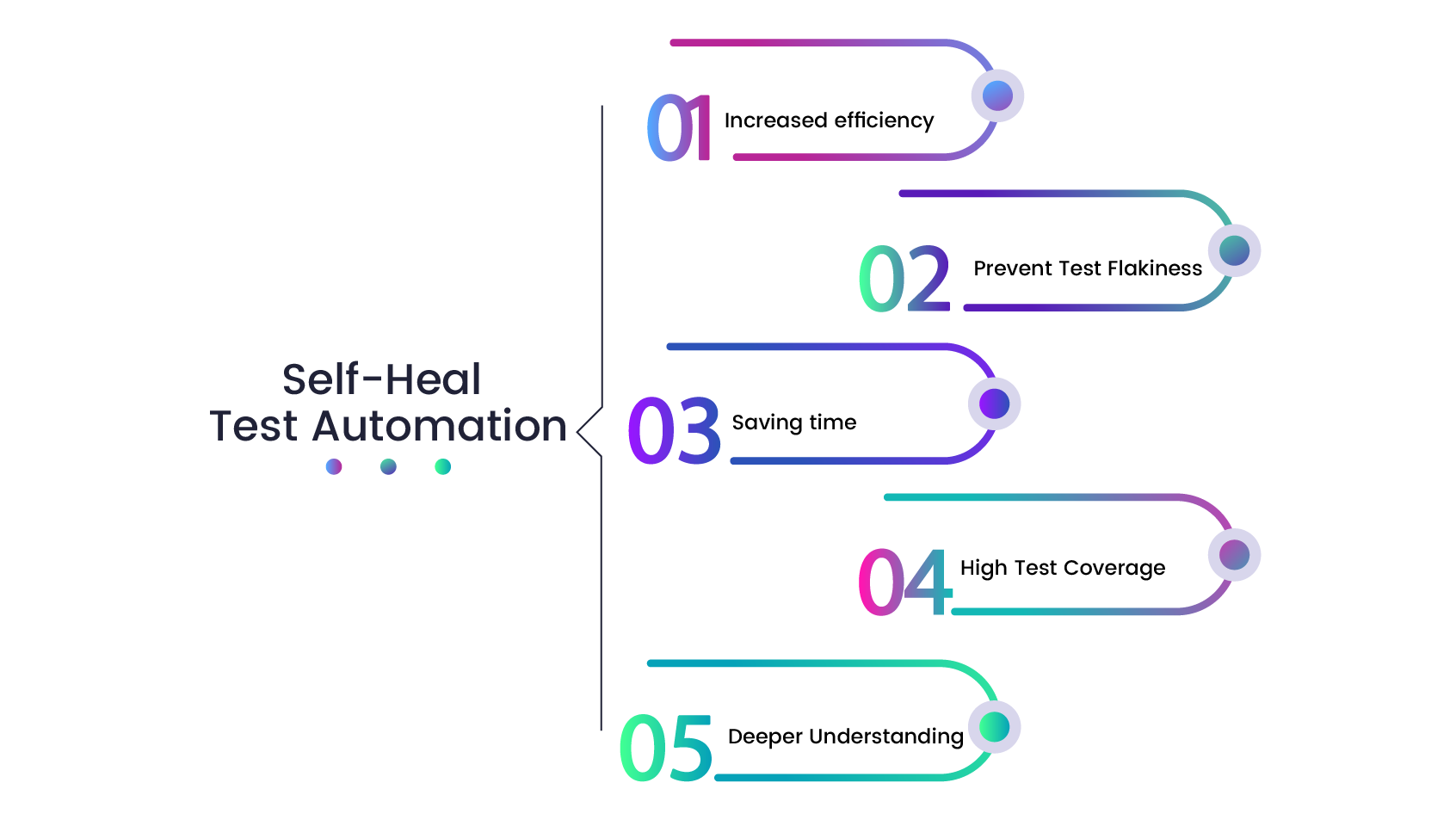 When it comes to software performance and quality, automation in the testing process is invaluable. However, they can be challenging and time-consuming at times, and even a minor technical glitch can result in undesirable impact. Self-Healing test automation automatically identifies and resolves such errors in fractions of a second.

Self-healing scripts not only decrease test maintenance time but also shorten time to market by up to 70%. As self-healing tests handle a lot of the tedious effort, testers are now free to create tests that thoroughly validate a larger range of application functionalities. High-quality tests also enable quick feedback and quicker problem-solving when problems do arise. Over time, these extra advantages lead to quicker releases, increasing testing productivity and efficiency.

A flaky test makes it difficult for testing teams to determine whether or not their tests are stable. There are a number of errors, including "Nosuchelementexception," that contribute to the unreliability of the Test design, and these errors are largely outside of the control of the testing teams. For example, If the team spends four months establishing a robust automation framework but spends more time maintaining the automated tests than using them to detect faults, the effort is not well optimized. Teams often have unstable tests that fail for many reasons. As a result, teams cease to believe in automated tests and return to manual testing.  Self-healing test automation allows developers to start with a minimal set of tests, continuously run those tests to find buggy ones, and isolate them from stable ones. This approach boosts automated test value by keeping the test design up to date with the application.

Quality software requires many testing iterations throughout the development lifecycle. Software should be retested whenever the source code is modified. Software may be tested on all platforms and versions of hardware prior to each release. Redoing these tests manually is both time-consuming and expensive. Once developed, self-healing algorithms may identify repetitive jobs far more quickly than your standard test automation let alone human testers. So, routine tests may be done in a fraction of the time, cutting down the whole testing process to mere hours. Your team can save time by validating newly developed features by automating the testing procedure. It also helps with sharing test results with stakeholders outside of the development team typically Business such as marketing, design, or product owners. These departments can easily see what's going on by looking at automated test results.

The number of tests that can be tested manually is limited. With automation, you can spend your time building your test suite rather than recreating it from scratch. This improves your app's overall quality by increasing the number of its features that have been tested thoroughly. Self-healing automation can boost test coverage by 5-10% by reducing redundant code, leading to crisp delivery timelines and increased ROI.

Using self-healing test automation, developers can identify issues early in the development process, thereby saving a substantial amount of time and money. In addition, it expedites the testing process while providing valuable insights into application problems and component performance. By examining the results of test automation, organizations can accelerate the debugging process and more efficiently handle discovered issues.

Test automation has become an integral part of software development and testing to ensure requirements are met before a product or service is released. There are times when test automation falls short of expectations when it comes to covering all possible use cases and environments, or when it overlooks bugs that can't be easily replicated in a different setting. In these cases, self-healing test automation can come to the rescue by fixing any problems with automated tests as they run and eliminate any defects, thereby improving your software delivery process.

Using self-healing test automation, Qentelli can help you modernize your IT infrastructure much quicker and make your organization a QE driven from being a QA driven. If you are interested in applying self-healing automation to your testing practices and achieve immediate benefits in the delivery process, drop us a note at -> info@qentelli.com