Talk to our experts about Microservices Testing Strategies 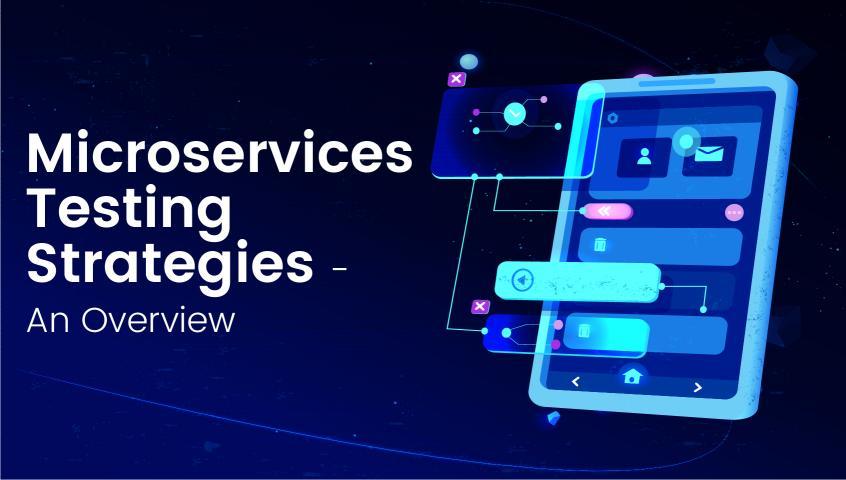 Microservices Testing is a term thrown around quite often in today's fast-paced world, and it has a profound impact on the architecture of software development, as well as on team culture. While traditional monolithic applications can be cumbersome to develop, microservice architecture-based software can be more responsive to customer needs. The idea behind microservices testing is to ensure that each service can be tested independently of its dependencies while also ensuring that all services operate together seamlessly. However, many developers and IT teams struggle with how to properly test these components in order to ensure they run smoothly. This article will cover why microservices testing is important for your software development, what kinds of tests you should run on your microservices, and how you can successfully integrate this into your overall testing strategy.

Despite its benefits, a microservices architecture introduces a number of risks. The distributed nature of this system makes its operation vulnerable to complexity. In microservices testing, the tests are embedded directly into the microservice's source code. Almost all of today's applications are made up of a number of microservices. And therefore, it is vital to emulate the behavior of other microservices when testing each one separately.

We isolate microservices and use test doubles to prevent the application from failure when it is executed. It is also easier to test API behavior from the consumer's perspective as we write tests at the granular level in the microservice layer. Component tests allow testers to better understand how the database and microservices work together as a single unit.

Microservices testing requires a distinct approach because of the dynamic scaling and sharing of demand that these services entail. The majority of microservice applications utilize many services concurrently. Because of this, services can behave different in the production environment than in the staging environment.

A more comprehensive testing strategy is recommended to ensure the smooth operation of all services and the architecture as a whole. Your strategy should encompass all aspect of the process, from the creation of APIs through the management of completed service requests.

When developing a microservice application, it's critical to consider how it can be tested. High-quality test coverage elevates the reliability of your code and streamlines your continuous delivery workflow. As this is a novel architectural approach, it necessitates a new automated testing and quality assurance strategy. Microservices are tested at five different levels.

If you're going to test microservices, unit testing should be at the top of your list. Unit testing is the practice of analyzing an application's smallest function or unit (preferably in isolation) to evaluate whether each unit functions properly given known inputs. Unit tests can also assess the dependability and stability of microservices application functions and classes.

Unit testing is a good idea for start-ups with limited resources. Typically, unit testing is very effective at finding bugs. When it comes to microservices testing, unit testing is the way to go because it allows you to find even the tiniest of flaws. It is predictable that you will only fix the bugs you are looking for rather than discovering new ones as you progress.

Tests of inter-service communication are called integration tests. The purpose of these tests is to verify the most basic success and failure scenarios across a network barrier. Integration testing verifies the communication pathways between the components and identifies interface faults in order to ensure the functional dependencies of the components. This is where all the test modules come together and tested as a whole. When the subsystem interacts with its peers, it checks to see if the channels of communication are functioning properly.

Microservice contract tests aid in determining whether the two systems' integration is functioning properly. A contract test records each service's interactions, stores them, and verifies that both parties are adhering to the contract. Interactions between an external service and its boundaries are tested for contract compliance to ensure that they are in line with the expectations placed on the consuming service by the contract. Tests for all services should be conducted independently, with the results verified by calling each service one at a time. When conducting contract testing, the consumer contract testing team uses the term "contract" to refer to a service call. If the need arises, responses can expand their functionality. There must be no interference with the service's operations with these additions.

End-to-End (E2E) tests ensure that a distributed application performs as intended from inception to delivery; that there are no major conflicts among the microservices, and that the system configuration is appropriate.

These tests are efficient, yet difficult to run and maintain. To discover breaking changes, reduce the amount of E2E tests in each application and depend more on lower-level testing approaches such as unit and integration tests. Mostly, a well-planned microservices testing approach should comprise more unit tests, less integration and component tests, as well as a minimal number of E2E tests.

In today’s business landscape, agility and innovation are the most crucial elements to disrupt your competitive marketplace. In order to be responsive and capable of continuous improvement, businesses should follow the microservices architecture design pattern, where individual services are small and perform one function only, but they can all work together to achieve common goals within the organization as a whole. Here are five-pointers to help you create a microservices testing strategy. Please keep in mind that these are only recommendations. For any testing plans, you need to consider the details of your setup.

Microservices can be tracked, monitored, and remedied using a variety of technologies. Microservice testing tools allow you to ensure the highest level of software quality and to deliver a product that succeeds in the market. Eliminating problems before they reach your customers will boost your team's and your customers' faith in your product and set you up for success. Here are some of the most popular microservices testing tools.

It's a free app written in the Go programming language. It is a fast, reliable, and easy-to-use database that is designed to make it easy to get time series data. When you use this tool to test the performance of microservices, you can find bottlenecks.

One of the best tools for performance testing that testers use is Apache JMeter. It is open source, which makes it easy for software businesses of all sizes.

Gatling is a microservices testing tool written in Scala that can run on a variety of platforms. Gatling auto-generates reports on metrics like the number of active users and response times at the end of emulation. Microservices and web applications are commonly tested with this tool.

It is an open-source distributed tracing tool for microservices-centric systems that checks and troubleshoots end to end. Root-cause analysis, examination of key service dependencies, and optimization of performance can all be done by tracking services across the software's operational environment.

Integration testing is made easier with the help of this open-source API communication simulation tool. Users can test APIs' response to specific events, like network latency and rate limits. As a result, proxy mode is used to simulate communication between microservices and record responses and requests to ensure that they perform as planned.

Using this contract testing tool, you can ensure that your apps are working in accordance with the terms of your contract. To put it more succinctly, consuming solutions dictate how data is provided to them by service providers. These contracts are continually tested by this tool to ensure that they remain in compliance. In other words, a special way of testing that minimizes the time spent on large-scale unit testing.

Apps and microservices running on Amazon Web Services can have their resource usage tracked with this monitoring tool. It's a useful tool for microservice load testing.

It's a free tool for displaying and analyzing metric data. It can be used to see how your microservices respond to real-time traffic using time series data.

Building a testing strategy for microservices

Microservices testing has become vital to modern software engineering practice as the market demands greater flexibility, speed, and agility in your operations. When it comes to microservices testing, it's critical to follow the appropriate practices, if you want to design secure and flexible applications that can swiftly react to customer needs.

When it comes to Automation, web development or evolving from QA to QE driven organization, Qentelli has a great deal of experience. Our team has exposure to a variety of architectures, including microservices. Testing for microservices is a complex process that Qentelli simplifies by focusing on the most important aspects of microservices testing. This has the potential to significantly improve your workflows and reduce the amount of time spent on troubleshooting. If you're interested in incorporating microservices into your software development strategy to ensure higher quality of your products, please drop us a note ->  info@qentelli.com