A Comprehensive Guide to the Scaled Agile Framework

Moving from CI to CD – Qentelli Way to Successful DevOps 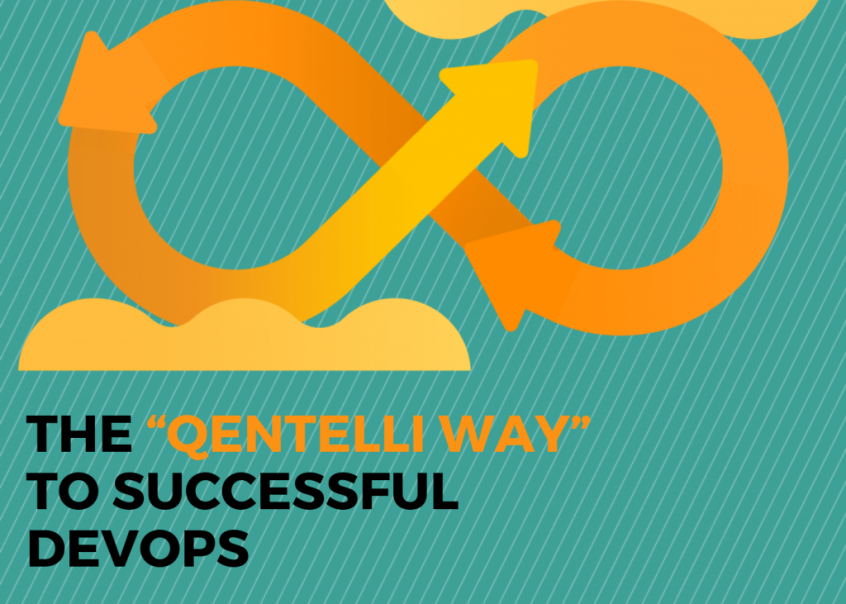 Enterprises want to innovate at faster pace, to match expectations from end users, and to beat competition. Continuous Delivery and DevOps are key to achieving the pace of innovation organizations are looking for. Many organizations who have moved from traditional models of development to Agile, have achieved some level of Continuous Integration, to support their Agile initiatives. Organizations are still struggling with the move to the next level, to help them achieve true DevOps. From idea to released product is what determines how fast an organization can innovate. Read on, to know how you can take that next step, and become successful at DevOps

If you have practiced agile for a while, you should have implemented some level of continuous integration. Checking in code to version control system, polling the changes periodically and running builds through a CI system.

Branching your way to CD

As part of Continuous Integration, the branching strategies were not given a lot of importance. They were used to better manage code based on releases. To achieve Continuous Delivery, having a proper branching strategy, and promoting the code between different environments based on the feedback from quality gates at each stage of pipeline is very important. The CI systems should be configured to run different jobs based on the branches and provide a way to auto-merge and promote the code to higher environments. The key to achieving Continuous delivery successfully would be to setup the right branching strategy for your end to end CI/CD pipeline.

Adding Continuous Testing into the mix

People often think automated testing is the same as continuous testing. Although as part of Agile, test automation was given utmost importance, the automation has always been Sprint-n. For continuous delivery being in-sprint with test automation is very important, as you like to test the features you like to release at end of pipeline. Continuous testing does not mean running all the 1000’s of selenium tests you might have created. It is important to build the right set of tests to test the features being rolled out, and make your test automation act as a quality gate to provide feedback on your release. Being able to leverage parallel execution mechanisms to complete test execution faster is also a key implementation strategy for continuous testing. Test automation frameworks should be designed with these considerations in mind.

Metrics were always important in an engineering lifecycle. For a successful DevOps, metrics have become much more important than ever. But it is no longer useful to have multiple sources of data to look for answers. DevOps needs actionable insights into data, often pulling details from different data sources into a single metric. While metrics from tools such as Jira were used to make Go-No Go decisions as part of Agile releases, for continuous delivery, the releases happen in automated fashion, and hence quality gates determine Go-No Go decisions of releases most times. To have predictive analytics on the metrics being tracked and appropriate notifications getting generated during errors helps in successful Continuous delivery. A quality intelligence platform is required to be implemented instead of a metrics pulled from different tools, for your continuous delivery initiatives

Automate as the key to success

Automating some of the key tasks as part of the CI/CD pipeline is important for frequent successful releases. The automation can be in terms of the various quality gates, in merging of code between different branches to promote the code, provisioning infrastructure, generating metrics and even rollbacks. The key to successful DevOps is automating the most important tasks of the CI/CD pipeline.

At Qentelli, we understand the importance of Continuous Delivery being an essential link in the IT leadership’s armor and our approach and framework have Quality Engineering and DevOps at the heart of this approach. Qentelli’s tool such as AiR ensures the highest quality being delivered using the CI/CD pipeline by providing the ability to auto-heal test scripts based on changes to code base and predicting issues with code during performance tests based on the result patterns.

Such AI-driven tools will improve the overall quality of the application being deployed into production and help in faster feedback during various stages of the CI/CD pipelines. This ability to predict issues and to fail fast would result in better overall delivery speed for organizations. AI-driven tools and Predictive analytics as part of your CI/CD pipeline is the next big step your organization can take today to be future ready and deliver faster with better product quality.
Our clients and most importantly, the teams found it very effective to have a complete deployment history visible across the team. The way to achieve ultimate nirvana in DevOps i.e Continuous Deployment starts with automating build, testing, integration, and deployment by practicing them on repeat mode.

To learn and explore more in detail about Qentelli’s AI-driven DevOps implementations, please write to us at info@qentelli.com. Our experts will be delighted to engage with you.