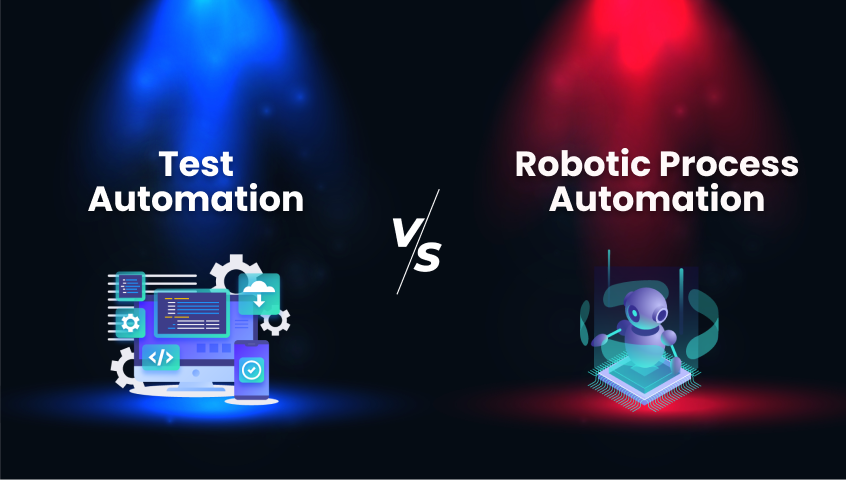 In principle, both RPA and Test Automation can be compared with their offerings around automation. Both also reduce manual intervention and improve the quality of the outcome. However, the extent of use for both the processes vary greatly. For example, in an e-commerce business, test automation can only be applied for the website or products. But RPA can be applied to several other business processes such as data entry for product description, automating the onboarding process to make HR operations seamless.

Here are the major differentiators listed between test automation and RPA:

Though there are many Test automation tools to for functional and regression testing, RPA is particularly preferred for its simple life cycle and easy adoptability. The main drawback of Test automation tools is, they are built for a specific product or application type (such as Mobile, Desktop or Web-based). On the other hand, RPA can be applied to processes and can be customized based on the requirement, so they aren’t bounded. User Acceptance Tests has been more accurate and effective with the involvement of RPA. That could be one of the reasons RPA is considered as a new power tool for Testing.

Are they Potayto – Potahto?

No, they aren’t. RPA tools are expected to run on the business production environment to achieve business tasks. Whereas, traditional test automation tools are intended to validate whether an IT application is performing as per the given specifications. So, they are clearly aimed to solve two different problems.

Then why are they often compared?

They both are Automation tools that can be used for record and playback. They both have capability to perform (or support) each other’s tasks but their design maturity and intent are completely different.

Our VP – Engineering who was also a hands-on QA professional shared a throwback which is a perfect example to demonstrate the Process Automation capabilities of Traditional Test Automation tools. In his words:

“This is from the times where we had to walk-around and find innovative fixes for the day-to-day business problems with the limited tools and platforms available. Artificial intelligence wasn’t really matured enough to rely on. Due to a technical error, we had to process $1 refunds to about 250,000 out of a million customers. It was quite a hefty job to pull out the 250,000+ accounts from the main database, validate them and perform the refunds to each. It had to be done in one go and it can’t go wrong. We didn’t have any RPA tools that are matured enough to do what’s needed. So, we have created a business case and used a popular functional and regression test automation software to validate the logic as a test case and deploy the same. Instead of using it in a testing environment, we have exercised it in a production environment.”

Similarly, RPA tools can perform Test Automation tasks, if needed. After all, they are made to automate any clerical task that is repetitive, pre-defined and can be scripted.

The concept of applying Robotic Process Automation can be traced back to the early 2000s, exploiting the software bots to take the load off manual testers has become popular in recent times. And today, RPA software is predominantly used in organizations where they have multiple complicated systems that need to interact together fluidly. The practitioners believe that Robotic Process Automation in software testing will be a game changer since it is not reliant on any specific programming language as much as an application that is being executed on a VM can also be automated.

What we’ve learned from our seasoned experts is, ‘What tool you use is important but how efficiently you use it determines the success or failure of the attempt’. We always believe in exploring the full capability of software and experiment to accelerate their potential. Being a Technology company with a focus on Quality, Innovation is an on-going process at Qentelli. Stay tuned for more detailed documentations of our Quality Assurance processes and new-age Automation efforts.

Struggling with a business challenge? Our RPA Solutions could be the answer you are looking for. Reach us: info@qentelli.com