Get Expert Advice on Digital Transformation

These people can make or break any company during Digital Transformation 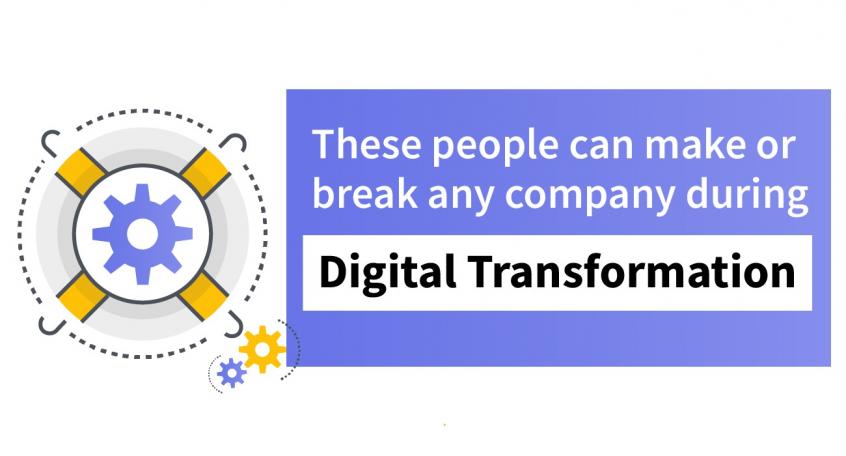 Apart from the countless adoptions and adaptions of various technologies & developments that take place every single day, we’ve witnessed three major industrial revolutions that have altered the way things are built, marketed, sold and used. Since nearly every ‘Thing’ is digital today, it is only obvious that the next revolution will be in the face of Technology. Enterprises will only sustain when they constantly reinvent their capabilities and strategies, not only to retain the existing customers but also to consistently acquiring new prospects.

As a result of globalization, millennial customers demand a wide range of technological capabilities combined with ease of use. Though there are a multiplicity of Tech novelties available, some companies are struggling more than expected to fight the disruptive technical expansions. Over time, some companies have successfully made the most of response time and came up with a plan to keep their position safe with a steady march in the market. For example, Honeywell (reacted quick enough to the smart-home thermostat by Nest Labs), IBM (from Mainframes to PCs for Professional Services), Samsung (Analog to Digital application-based smartphone), Microsoft (Browser disruption), Adobe (the transition from desktop to SaaS), etc. Since it is a survival-of-the-fittest phenomenon, some businesses couldn’t make it far. E.g., Blockbuster, Nokia, Polaroid, etc. The major threat is to the old players who grew as industry leaders using traditional approaches and not being able to digitally empower employees, engage customers, optimize operations and transform the products through a system of data intelligence.

It is already established that business landscapes are changing, and adoption is inevitable to stay relevant during the shift. Even though the digital metamorphosis is for the best interest of the company, the major task is to get the entire C-suite on board with the idea. Because, practically the only way to holistically implement any new mechanism is through the complete validation and endorsement of chief executives, especially in publicly traded companies when there are shareholders, employees, consumers and other stakeholders involved. According to research from Marco Iansiti, a Harvard Business School professor three years ago, ‘The Digital Laggards will suffer the disruption caused by their nimble rivals and the only way to stay competitive is to harness data’. Making decisions based on the data and facts instead of theoretical opinions is the only way forward. The CIO plays an important role in this phase and if well equipped, he/she can be a great strength to the business.

Just like many other tech trends, Digital Transformation has also gained steam over time and the term is constantly overused irrespective of the contextual relevance. Often the vendors may exploit the gamble and make the catchphrase confusing at best. That very phenomenon may create a Cargo Cult effect and divert the businesses from the much-needed immediate action. The Chief Information Officer is always on a lookout for disruptive technologies and resolutions to fight it. The change can be initiated with the three T’s of transformation: Teams, Tools and Timelines. Creating small yet focused core teams and equipping them with the right tools while monitoring the whole process across the predefined and strategically placed timelines.

One part of the C-suite always guards the budgets and expenditures and the other part has hereditary instincts of expanding, investing and making the firm widespread. They will have to consider the major aspects of the business such as bringing down the CapEx & OpEx, infrastructure life-cycle management, improving employee productivity, maintaining customer satisfaction, and not to forget - keeping the business sustainable. Only the Tech and Data chiefs have the chance to balance both with right Digital strategies and tech-investments.

According to Gartner, CIO of digital-era needs to be proactive and involved because Tech-in-business-as-usual attitude will only risk becoming a second-class citizen of the executive suite. Driving the change doesn’t stop at Executive Leadership level. Managerial heads need to be completely on board for the idea of being upgraded from Legacy systems to the Next level Tech ecosystem. That includes training their teams, aligning technology to the business needs and constantly monitoring the improvements. Then comes the execution teams which includes the Developers, Testing Engineers, QA and Operational Teams who should be committed to quality and consistency.

Today’s market demands you to scale your apps with their needs and requires you to build new feature soon enough before the last one gets old. The systems need to integrate with their business applications without compromising the Quality. Not to forget, you need to be always ‘On’. Many tech geeks have admitted that practicing DevOps methodology is one of the few modern exercises to get Digital Transformation right. DevOps brings software and infrastructure together to accelerate software and services delivery exploiting the benefits of automation. Let’s just admit, Development and Operations teams usually work in silos. It’s an evolving collaboration that tech leaders need to nurture in order to build and maintain quality applications. But then, in the context of increasingly distributed and complex systems and tool sets, when things go wrong, accountability of incidents often remains unclear. Applying equal ownership to everyone won’t solve the problem rather makes no one responsible when an application break. It is important to create clear and specific responsibilities to each while keeping everyone informed enough to ensure reliability and quality.

So, how do we create an effective DevOps environment that works well for the organization? We at Qentelli implement CALMS model (Culture, Automation, Lean, Measurement and Sharing) proposed by Damon Edwards and John Willis.

Culture is the essential part of DevOps and subsequently Digital Transformation journey. Be inclusive and make people feel participating and contributing. Encourage teams to limit the Technical debt by making the best use of Scrums. Change the traditional siloed DBAs to eliminate bottlenecks and collaboratively work towards the same goal each time.

Experts say, if you get the Automation right, one-fourth of the work is done. The major parts are to automate the tests on the Infrastructure and establish Continuous Integration, Delivery and Deployment pipelines.

Whatever you do, do it Lean. Focus on incremental improvement and strategically split the projects into small executable batches. Continuous improvement isn’t achievable if constant monitoring and measurement aren’t in place. Monitor the internal processes, such as the time taking for the committed code to be pushed to production, release frequencies, failure rate, and recovery time.

Sharing might not be caring but it is curing for sure. Iterative learning and Knowledge transfers among the contributing teams will make a huge impact on the culture.

The continuum starts from Digital Enablement, Optimization and moves towards comprehensive automation using intelligent self-adaptive systems. Taking the light of proven methodologies, it’s not too late to implement DevOps into your projects. Bolt it seamlessly into the current programs by starting with one or two projects with low-risk elements and expand it based on the results. According to International Data Corporation (IDC), worldwide spending on Digital Transformation (hardware, software, and services) has soared past $1 Trillion in 2018. The pace of substitution in digital transformation is exponential. Born Digital companies are stepping in with a new challenge every day. It’s important to stay alert and updated to keep yourself ahead in the race.

Kick start your Digital Transformation journey before your competitors do. Reach us to understand the Digital capabilities of your business today.