Talk to our experts about Service Virtualization

RPA: How Easy is to Get Started?

How to Sell Digital Transformation to your Board?

A Guide to Embedded Finance

When is the Right Time to Invest in Automation?

3 Strategies for Implementing a Microservices Architecture [+A Little More]

Why Should Business Executives Back Data Lake Investments?

Fundamentals of Cybersecurity in Banks

What is Service Virtualization? 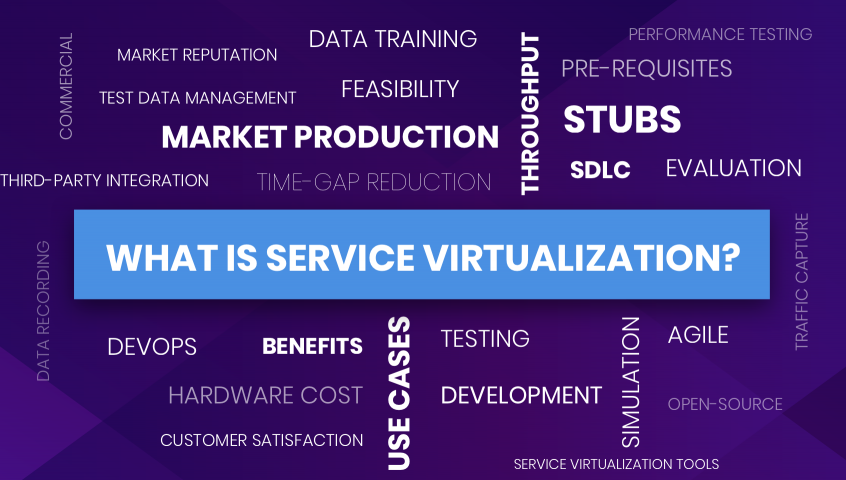 Time Lag is every software teams' nightmare, and Service Virtualization is a savior! Team productivity usually hampers when there are too many dependencies among the team regardless of following SDLC/Agile methodologies.

Service Virtualization mends these productivity gaps by syncing tasks across multiple teams and speeding up the dependent task completion rate. Virtualization means emulating production services in the current computing environment without affecting teams' progress, hence the team gets to do more quality work in less time.

In short, the tester cannot do any work until API information is available to the developer.

A solution to the above scenario would be to opt for service virtualization. It usually offers a realistic virtual environment by mimicking any unavailable service and components. It can also help with realistic API simulation. In this discussed scenario, once the API simulation is done, the virtual API component would be available to the development team, which would decrease teams’ dependency time.

Thus, it helps the dependent teams with their task completion by simulating a component even before that component is developed or is unavailable due to some reasons.

As per a Gartner survey conducted among 500+ organizations, the highlighted benefits were:

In a complex testing environment, virtualization can help with:

How Does it Work?

Service virtualization is implemented based on project type. For example, in a DevOps environment its implementation is as follows:

When we talk about virtual services, you may think about stub or mock services. But it is interesting to note both are built for different purposes. Let us have a look at those differences.

Stubs are usually fake software that imitates specific real-life software behavioral response, and they are used for testing. Stubs are content-specific.

So, the optional pre-requisite before opting for virtualization is:

All the above prerequisites might help you achieve an optimal implementation with a harmonious balance between project cost, quality, and scheduling.

Across the entire technology landscape, Service Virtualization has a wide variety of use cases. It can be used right from training an environment, data management to performance testing and so on.

Let us have a look at some of the use cases

Usually, a training environment would have:

Service Virtualization can simplify the testing environment by mirroring production and backend services. It easily carries all these mirroring activities without any additional hardware spend.

Sometimes maintaining a live performance environment can become a challenging task because of several external dependencies and response time lag.

Service virtualization allows performance testing in a more integrated way by mimicking the external absent dependencies and reducing the response time to a manageable level.

There may be a possibility of third-party application unavailability, which might lead to a production environment halt.

Service virtualization can help mimic the accurate behavior of third-party systems in a timely fashion. That helps with proper system synchronization and system behavior, even without waiting for third-party services.

As per Coleman Parker’s survey, according to the participated developer team, service virtualization might bring the following positive changes in an SDLC workplace:

Service virtualization is a powerful tool that can be used in any Agile, DevOps environment and even during any stage of SDLC. It aligns all the team’s work effort in producing a fast and much more reliable product. It helps with:

If you are still not sure about service virtualization, reach out to our team and we would love to help you out with an optimized solution.